The story behind the quilt – Grandmother’s Flower Garden

When we saw Beatrice Rieske’s post in the APQS forum about the Grandmother’s Flower Garden quilt she recently completed for a customer, we thought it was stunning. The level of detail and love that went into the quilt were very apparent. As a result, we decided to give Beatrice a call to learn more about the process of making this stunner!

Beatrice is based in Chilliwack, BC and has been operating Pumpkin Patch Patterns & Longarm Quilting since July 2016. She started her quilting career in Germany in 1998 after falling in love with a book about quilting. Despite quilting not being a widespread hobby in Germany, Beatrice taught herself how to piece tops and quilt them on her domestic sewing machine. She eventually moved to Canada and turned her hobby into a career when she started working in a quilt shop.

Unfortunately, her newly found career came to a halt in the winter of 2015 when she was diagnosed with breast cancer. After a year of chemotherapy and radiation treatments – and with her cancer in remission – she decided to make the jump to quilting for others. She bought an APQS Millennium machine and started Pumpkin Patch quilting.

Tell us about this quilt. How did you connect with the piecer?

My customer, Penny, was referred to me by someone in my quilt guild. She called me and said she had a hand-pieced, king-sized Grandmother’s Flower Garden quilt that she’d been working on for close to five years. She wanted to gift it to her daughter for Christmas and needed some help with the quilting to meet that deadline. Every flower is made up of seven different fabrics, and every fabric was only used once in the quilt. There are a few repeats in the green background but not in the flowers.

What direction did she give you on the quilting, if any?

The only thing she really said is that she wanted “the flowers to look like flowers.” Beyond that, it was up to me. I was really happy to hear her say that because it gave me the creative freedom to quilt a design that I felt would work best for the piece.

How did you tackle the quilting design? What was your approach?

Typically, what I do is look for inspiration in other quilts. I have a lot of images saved on my Pinterest page and have other sources of inspiration here in my studio. I saw one quilt that had a design that looked like there were circles in the hexagon, which gave the illusion of petals. I kind of took it from there. 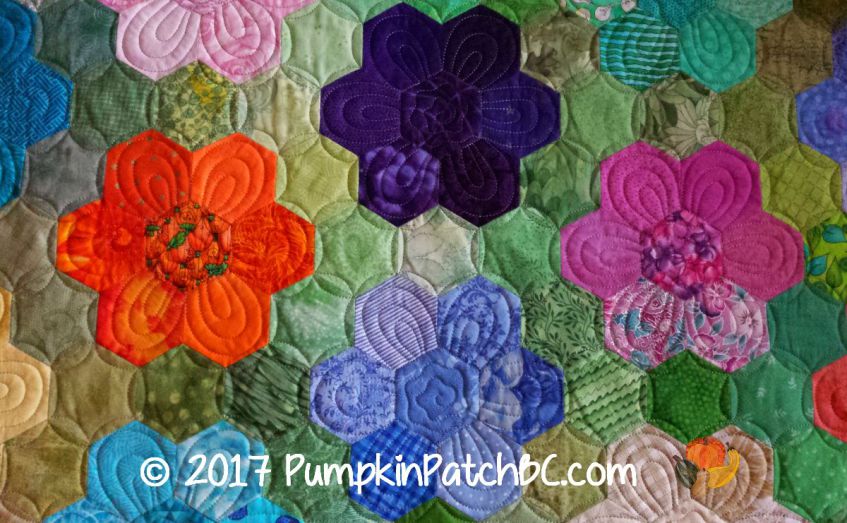 I used the same freehand design for each flower. For the background, I did a simple little outline for each hexagon. Afterwards I realized it almost looked like another echo around the petal, which was a happy coincidence. 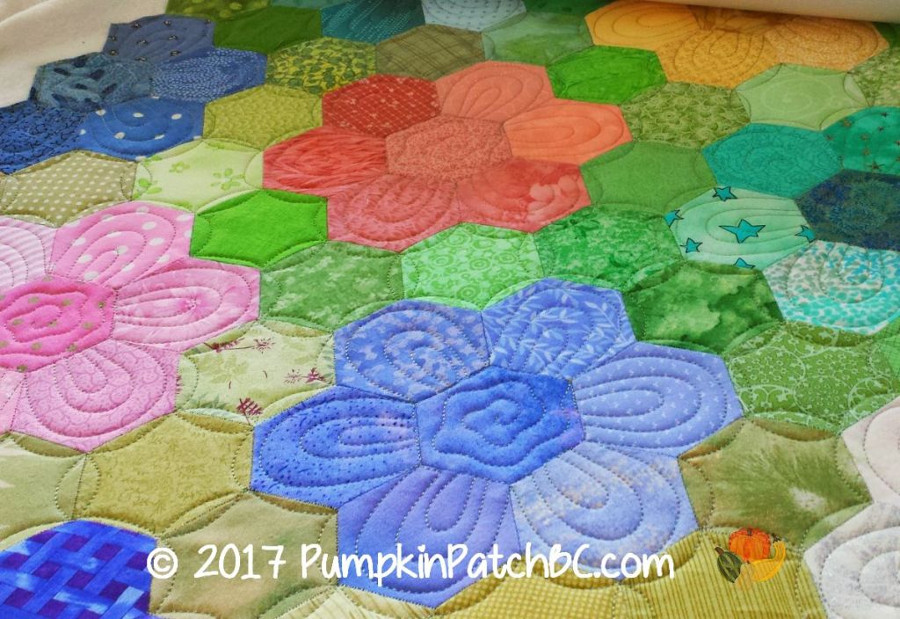 I managed to do every flower in one continuous line, and after finishing one row of flowers, all the green hexagons around them could be done without stopping. I was worried that I’d miss a few hexagons, so I checked every single one before taking the quilt off the frame … and I had missed two. Boy, was I glad I took the time to do that. 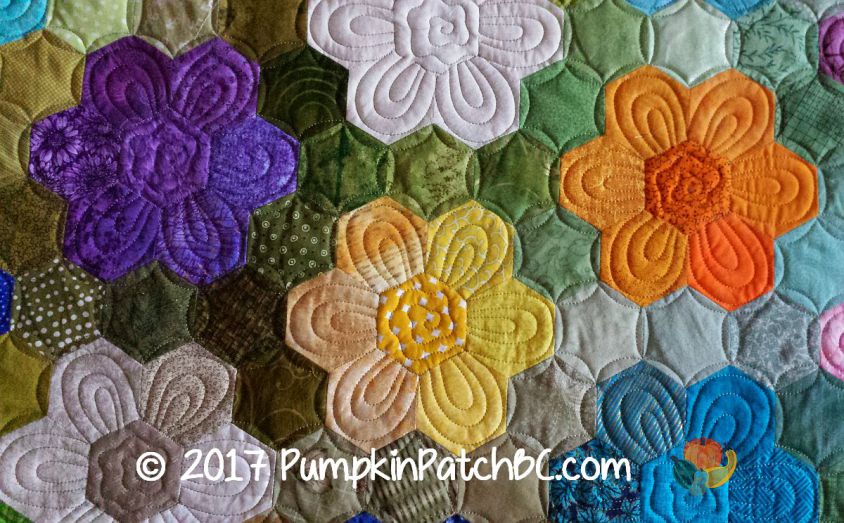 What was it like quilting such a large piece with so many repetitive elements?

I built a lot of muscle memory! It was really amazing to quilt it because I recognized a lot of the fabrics that she used in the flowers from years ago. If you’ve been quilting for 20 years you remember certain fabrics. It was a walk down memory lane! This was one of the only quilts I’ve ever quilted where I was almost sorry when I was done.

APQS Team
This post was written by members of the APQS marketing team.
APQS Tutorial: Abstract Tulip Border
Breaking down a border into quadrants can help give needed references points to make custom quilting much easier. This abstract tulip border can be altered a number of different ways and will serve you well.
Keep reading >
Quilting with templates
When quilters hear the word “template” we usually think about a thin piece of cardboard or clear plastic which we trace around to create a patchwork shape for our quilt. However, if you own a longarm quilting machine...
Keep reading >
Keep scale in perspective when sketching
Is your purse full of little scraps of paper with quilting design ideas doodled on them? Does your checkbook register look like an artist's pad?
Keep reading >
Free quilt pattern: Flight Path
Lyn Crump's foundation-pieced free quilt pattern will make you feel like you're flying on cloud nine!
Keep reading >