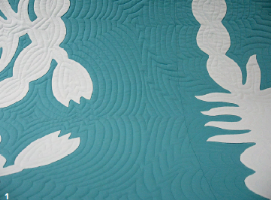 Have you ever put a great deal of effort into choosing just the right quilting stencil or design for your block, carefully placing it and stitching it, only to lose sight of it when you look at the quilt? Or maybe you’ve spent tons of time quilting an elaborate feather motif in your border, and then discovered that it blended in with the fabric and disappeared! With just a little extra effort and another pass around your design with an “echo,” the lost will be found once again.

Hawaiian appliqué is the most common example of the power of echo quilting. It uses the curves of multiple echo lines that ripple across a quilt. The quilting around the large central design of a Hawaiian appliqué quilt (called a “kapa lau”) creates waves of stitching that roll and flow out toward the quilt’s edges. These waves are reminiscent of water breaking on the shore, or the contour lines on a map, and are called “luma-lau” in Hawaiian.

To read the rest of this article about quilting styles, download the full “Quilting the Quilt: Echo Quilting” article.

Dawn Cavanaugh
Dawn Cavanaugh is the Education Director at APQS.
Spring cleaning for quilts
A quilt's condition will determine whether you can launder it safely.
Keep reading >
Labeling a quilt
As works of art (including quilts) are passed down through generations or sold, the ownership history and documentation—provenance—should accompany them. A quilt label is the first step in providing authenticity for your quilt. You may not think that the quilts you make will ever become a valuable treasure…but your great-granddaughter might think otherwise!
Keep reading >
Free quilt pattern: Christmas Time table runner
Looking for some quilting inspiration? This FREE Christmas Time table runner pattern from APQS Dealer Suzan Pons is quick to put together and will fill your home with holiday spirit!
Keep reading >
APQS Video Tutorial: Fern Twist
APQS Dealer and Educator Angela Huffman shares an alternative to feathers - the fern twist. The leaf shapes are much more forgiving and easy to master.
Keep reading >