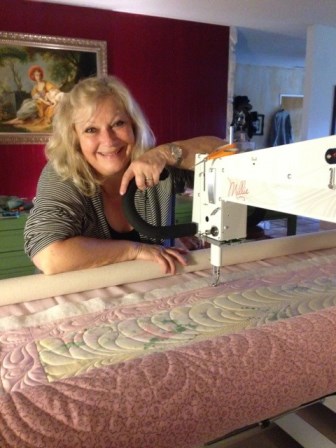 Beth Maitland-Banninger’s entire adult life has been filled with the creative arts. For the past 30 years she has played the role of Traci Abbott on CBS TV’s “The Young and the Restless.” She has also been sewing since she was a teenager and spent most of her downtime between acting as a personal accessory and costume designer. In between all that she also developed a love for longarm quilting.

Before joining the APQS family, the Emmy-award winning actress owned a mid-arm quilting machine from a prominent manufacturer and was not pleased with the machine. The stitch regulator didn’t work properly from early on, and the service and technical support departments weren’t able to help her fix it.

“There were lots of hiccups mechanically,” Maitland-Banninger said. “I ended up being able to use it only on non-regulated mode, which made me a much better quilter, but made me realize I needed something better.” 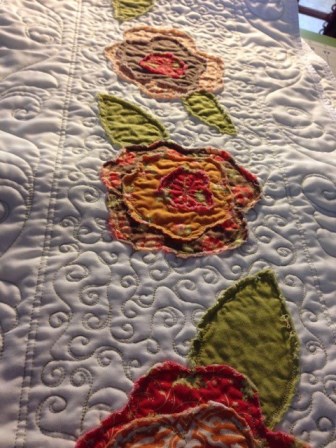 Knowing what she wanted from a new machine and what she didn’t like about her mid-arm, Maitland-Banninger went on a search for a longarm that would meet her needs. She even traveled three hours to test drive multiple manufacturers. With every machine that she tried she became more convinced that the APQS Millennium was the longarm for her.

The main selling points for Maitland-Banninger were the technical support, customer service and online quilting forum where she would be able to get any questions answered right away so she could get back to quilting. 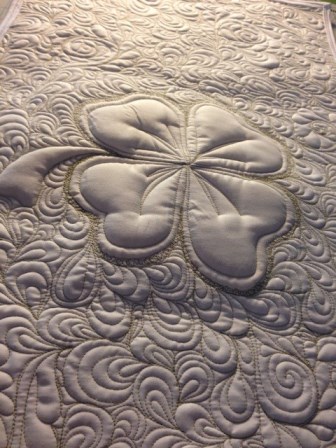 “Its reliability is the selling point,” said Maitland-Banninger. “I’m not worried it is going to break. I am able to jump into projects with confidence! If I do have an issue, even if it is a little thing like tension, there are hundreds of people who can help me out on the forum, a group of such generous and experienced and welcoming quilters.”

Maitland-Banninger has owned her Millie for a little more than six months, and has spent much of that time learning new techniques. She is working on using negative space and borders to try out new ideas, experimenting with raw edge applique, faux trapunto and using channel locks. She opted not to buy Quilt Path because she enjoys the feeling of creating designs with free-motion quilting. 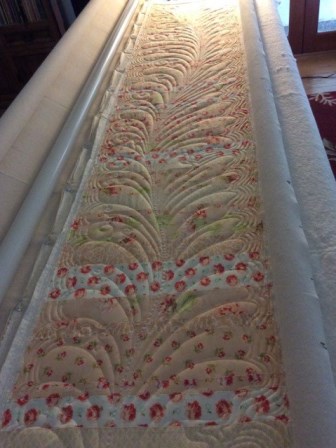 “I am more attracted to modern quilting and the sketching with stitches process,” said Maitland-Banninger. “My happiest quilting moments are free-motion quilting.”

Between the APQS forum, superior customer support and an overall better functioning machine, Maitland-Banninger believes her quilting is developing by leaps and bounds! “I can expand my horizons quickly instead of trying to figure it all out alone,” Maitland-Banninger said. “With the Millie I am able to try all kinds of things. I am expanding my skills and techniques while having a blast with a hugely improved overall experience. I LOVE quilting again!!”

Maitland-Banninger has a blog and social media profiles where she chronicles her creative endeavors. You can read more about her quilting adventures on her blog, Facebook and YouTube. 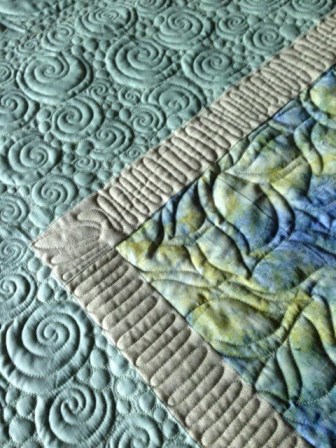 APQS Team
This post was written by members of the APQS marketing team.
5 ways to audition quilting ideas on a quilt top
There are many ways to audition quilting ideas on your quilt top. Here are five of the best...
Keep reading >
Watch an APQS flash mob and help us honor veterans with Quilts of Valor
This Veterans Day, APQS is honoring veterans for their service by raising awareness of Quilts of Valor (QOV) and asking longarm quilters to volunteer their machine skills for a good cause.
Keep reading >
How to machine quilt a baby quilt
Making a baby quilt for a precious bundle of joy is the perfect way to celebrate a new life. Plus, it is a wonderful reason to shop for adorable fabrics.
Keep reading >
2 common backing troubles
Today we are focusing on some of the backing troubles that can derail an otherwise wonderful quilt...
Keep reading >