Quilting the Quilt: Oh, the places you can go

Any quilter who has packed supplies for a weekend retreat knows how hard it is to decide what to bring and what to leave behind. Imagine trying to make those decisions when your trip won’t be just for a weekend, but potentially for a lifetime! Add the fact that you are also a longarm quilter and suddenly it’s a game changer.

Nichole Wilde, a nationally recognized quilter and longarm teacher, faced those difficult choices recently as she worked to rebuild her life and her quilting passion after suffering devastating family losses.

Nichole’s exuberant personality and her ability to help timid quilters learn to “quilt like a rock star” quickly propelled her into the spotlight over a decade ago. Nichole first took up quilting in 1999 after the birth of her third child. Like most people who discover the joy that comes from handling
fabric and thread, Nichole was hooked.It wasn’t long before her home sewing machine would no longer handle what her creativity demanded. Once she was introduced to longarm quilting, Nichole emerged like a butterfly that had been held captive in a cocoon.

From her home base of Houston, Nichole crisscrossed the United States and Canada teaching classes. Her unique freehand quilting style and her ability to help even novice quilters find the hidden artist inside themselves have made her popular at quilt shows and guilds. Nichole’s approach to quilting isn’t based on following arbitrary rules or expectations. Her students learn how to let go of self-imposed limits and allow their creativity to spill out.

Life changed for Nichole in January 2014 when her assistant suddenly passed away. Nichole returned to Washington State to attend the funeral. The trip’s purpose was to mourn the loss of her dear friend, but it also contained hidden blessings. She was able to spend time with her daughter Delaney and her daughter’s fiancé, Alan. She was able to reconnect with her mom after a long separation. Nichole was pleased to see Delaney and Alan so happy and was looking forward to their wedding later that summer.

Just two months later on March 22, Delaney and Alan were in Oso, Washington, at the home of Nichole’s parents, Thom and Marcy Satterlee. The young couple was planning their August wedding by the Stillaguamish River. Suddenly the hillside above Oso collapsed, burying the community under a mountain of mud and debris. All four perished in the landslide. In addition to Nichole’s family, 39 other people lost their lives, making it one of the single deadliest landslide disasters in U.S. history.

It’s hard to imagine the grief the victims’ family members felt after such a sudden, devastating loss. The catastrophic event turned Nichole’s life upside down. She pulled up roots in Texas and moved back to Darrington, Washington, to assist with efforts to rebuild the community. The time back in her hometown was very healing. However, Nichole’s marriage also ended during that time. Those tragic events led Nichole to reevaluate life and make decisions about what was really important to her. She realized it is not enough to live life sitting idly and accepting the status quo; she believed that everyone has a responsibility to “be the change you wish to see in the world.” She then came up with the idea to start a “Random Acts of Artwork” program. Based in Darrington, members of Nichole’s movement are dedicated to making a “beautiful difference” by sharing original, personal artistic expressions with the world. The group uses the Artist’s Trading Card format, but not with the intention to exchange them with other artists. Instead,
members give cards to random friends and even strangers. They may be handed out in person, or left for people to discover on their own as a way to brighten the recipient’s day and bring sunshine to their world through art.

Nichole developed a plan to help communities organize their own Random Acts of Artwork events to bring the community together and spread beauty across the world. Participants are provided with assorted art supplies to make several Random Acts of Artwork pieces during the event. The artists’ medium can be anything—fabric, paper, crayons, paint, or whatever inspires them. People of all ages participate in the movement.

Nichole looked for a way to put that into practice across the country, inspiring her to pursue a dream that had been incubating since 2004. Traveling to teach quilting across the country is not as glamorous as it sounds. Fighting airport crowds, dealing with flight delays, shipping supplies to and
from venues, and sharing hotel rooms is not really all that fun. Nichole dreamed about a perfect way to travel—if only she could find a recreational vehicle large enough for her APQS Lucey longarm quilting machine.

After much research, Nichole found her RV. Despite the salesman’s skepticism about her idea and her ability to drive a big rig, Nichole bought a 40-foot Alpha motorhome. Its side extension was just the right length for her 10-foot Lucey longarm table. Most of us dream of bumping out a wall and
adding a big quilting studio to our house so we can move our sewing machine out of the spare bedroom. Nichole managed to do just the opposite—her “sewing room” collapses into the house. Living and working in such a tiny space requires a different type of creativity. 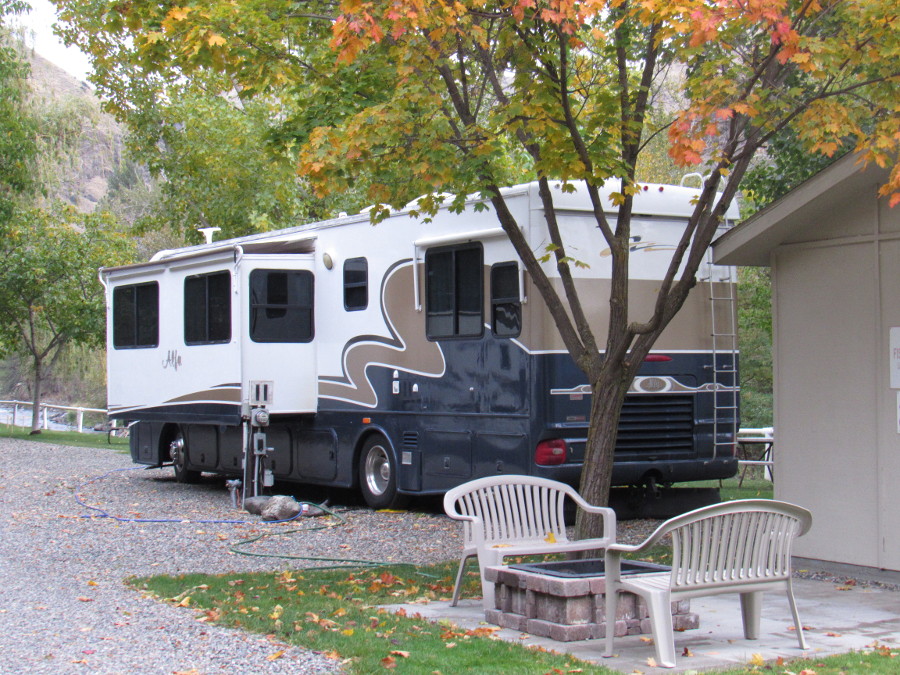 With the help of friends she ripped out the built-in couch and dinette, modified the bus’s side extension with eye bolts to secure the longarm during transport, and adapted a table to permanently mount her sewing machine near her longarm. When the side extension pulls in during travel, her Lucey longarm table slides just over the top of the kitchen sink, compressing the space like an accordion.Nichole has become very adept at squeezing under the longarm frame to reach the bathroom when the side extension is retracted and nature calls.

Every square inch of space in the bus does double–and sometimes triple–duty. A folding table doubles as both a dining and cutting table and stays tucked beside her bed. Visitors to her home/studio-on-wheels relax on fold-up lawn chairs outside the bus. Plastic totes keep living essentials
neatly organized under the longarm table. Huge rolls of batting are stuffed into the shower stall between showers. Her ironing board slips in next to the folding table beside the bed. A slide-out pantry stores her fabric collection instead of canned goods and cooking supplies. 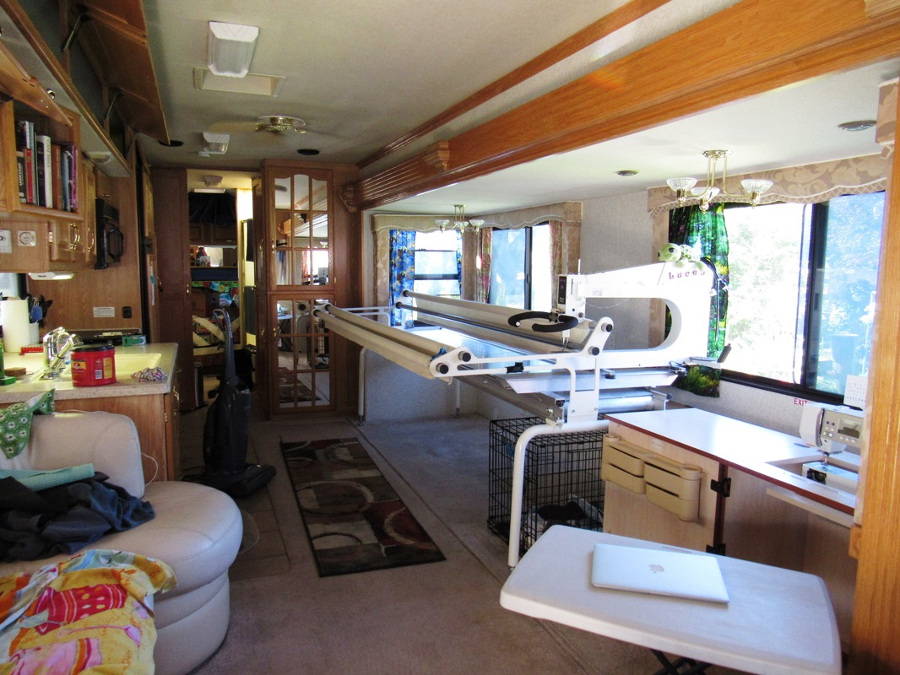 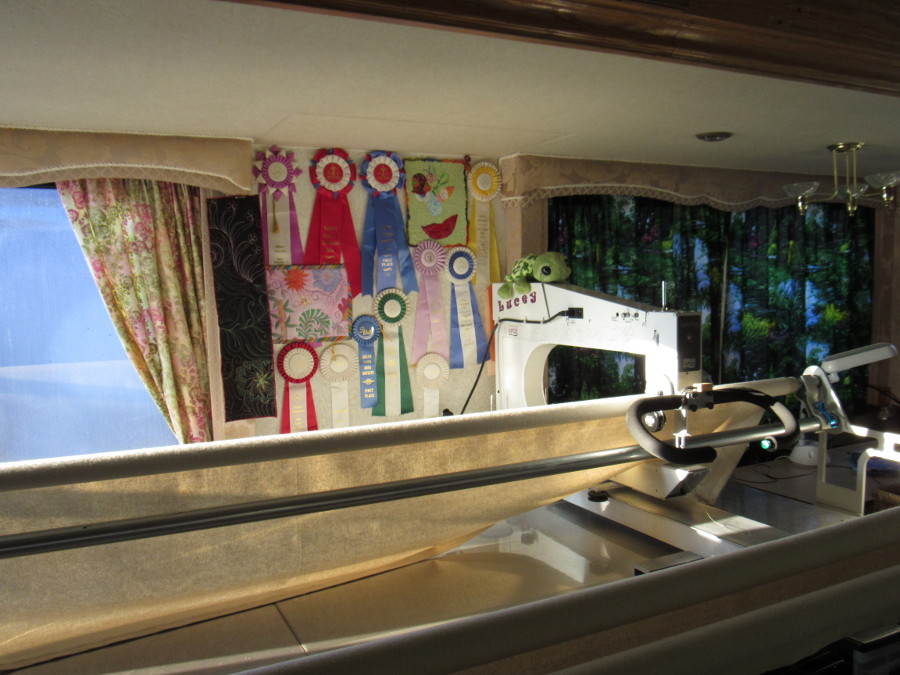 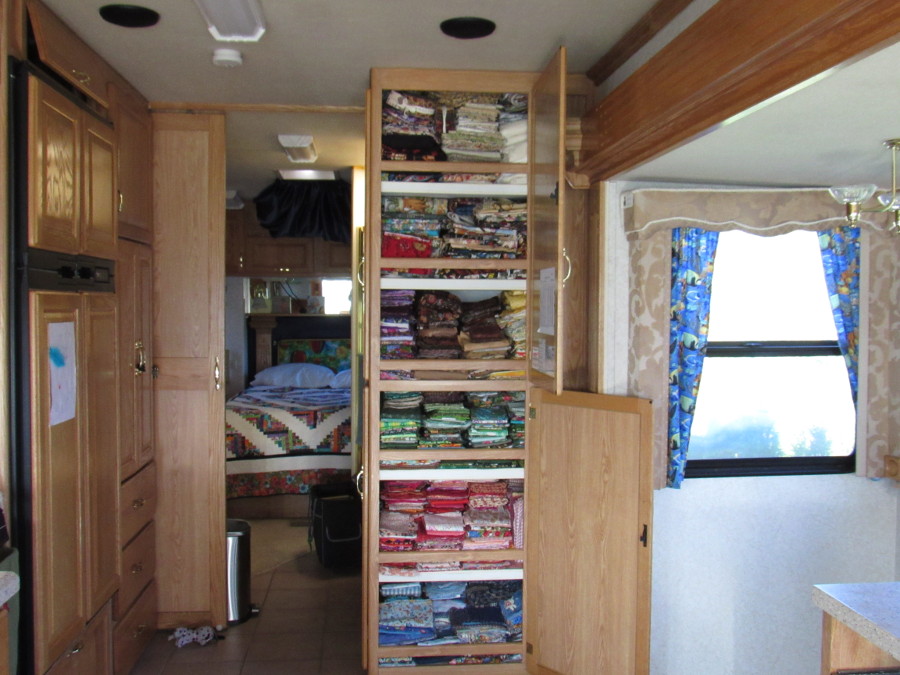 Life “on the road” requires everything to be very portable and mobile, but when it’s time to travel it must all be safely secured. Since she has no permanent front yard, Nichole decorates the area around and inside the art bus with houseplants. When she is traveling, the houseplants are
situated in the shower so they won’t topple over but can still enjoy the sun beaming in through the skylight in the tiny bathroom. Nichole decided to eliminate clutter and keep only essential possessions for living, freeing herself to concentrate on things that make her happy and help her pursue her quilting passion while spreading Random Acts of Artwork across America. Her awards and ribbons displayed behind her Lucey longarm show the quality level of her work and the depth of talent she brings to each new location. 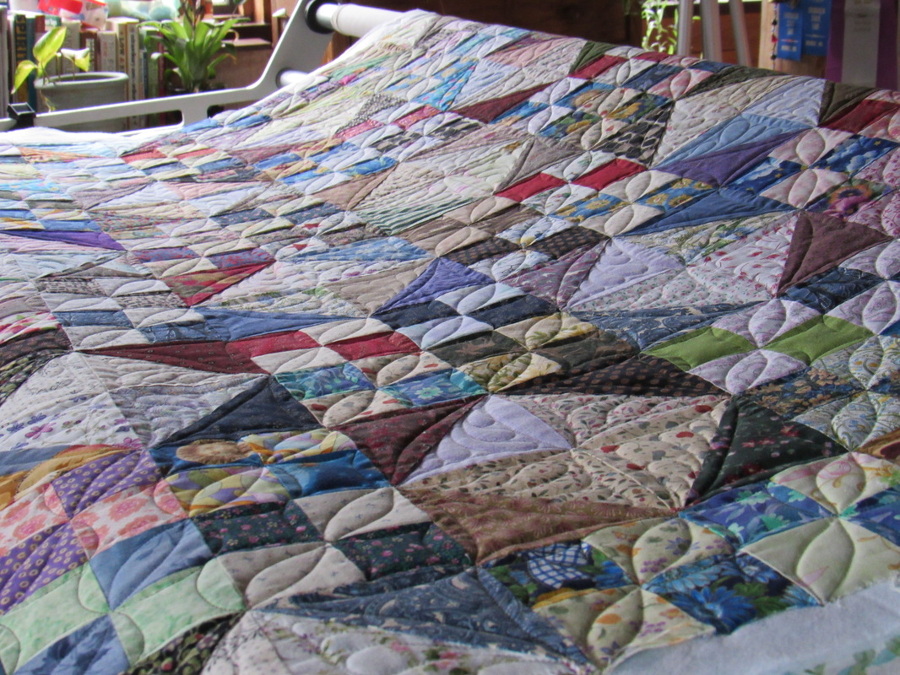 Nichole has been on the road full time since summer 2016, traveling the country in Artie the Art Bus along with her sidekick and rescue dog, Snoopie. Now she literally “takes her show on the road,” teaching classes and quilting quilts for others. Visit her website at www.nicholewilde.com to follow along with her adventures in Artie the Art Bus or to arrange a quilting class in your neighborhood with this talented quilter. You won’t have to pack your quilting supplies for a retreat–Nichole will bring the retreat to you!

Dawn Cavanaugh
Dawn Cavanaugh is the Education Director at APQS.
Quilting the Quilt: Embracing the curves
Experiment with ‘wavy’ rulers to add movement, dimension to quilts...
Keep reading >
How would YOU quilt the quilt – Georgene Huggett and Betty Reid
We asked Georgene Huggett and Betty Reid to quilt the same traditional quilt pattern for us. Take a look at how each dealer chose to interpret the quilt differently
Keep reading >
Free quilt pattern: Simply Strippy baby quilt
The “Simply Strippy Baby Quilt” pattern she’s shared is perfect for newbies and experienced quilters alike. The quilt is designed to teach beginners how to piece and quilt, and is part of Teresa’s “ABC123” pattern series, where the patterns increase in difficulty and complexity as quilters move up in the series.
Keep reading >
Free quilt pattern: Stepping Stones
The graphic nature of this quilt design makes it very versatile and perfect for anyone on your gift list. This design is from APQS Dealer Tracey Russell. It's easy to put together and makes for a quick quilt.
Keep reading >