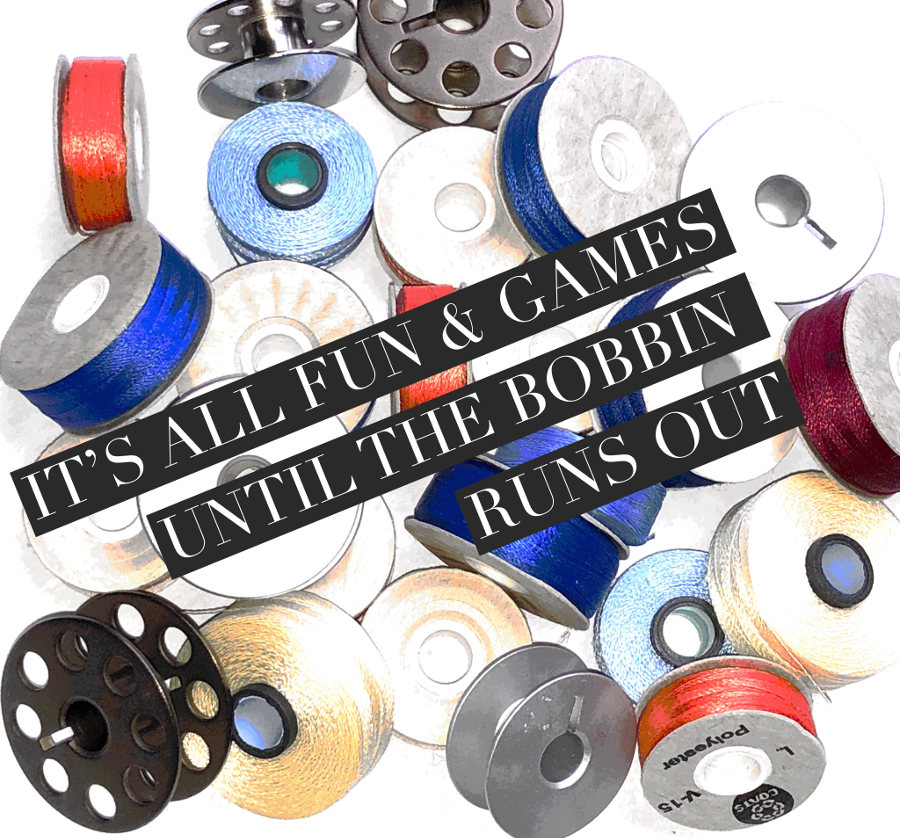 What’s the biggest nuisance in quilting? Hands down, running out of bobbin thread! When some brilliant engineer finally figures out how to make a lock stitch machine with a perpetual bobbin, I want a piece of that action. But since that’s still a pipe dream, we’re faced with the reality of changing bobbins. Here’s a look at different bobbin types and sizes and how they impact your quilting.

Whereas many companies offer only one bobbin size option, APQS customers can select the bobbin size that best fits their quilting style. You can choose a “Smart Bobbin” (Style L) or a “Big Bobbin” (Style M) in your new machine. I’ve outlined the characteristics of each size below to help you decide what’s right for you. The photo below shows how the Smart Bobbin case and hook assembly compare to the same Big Bobbin parts. 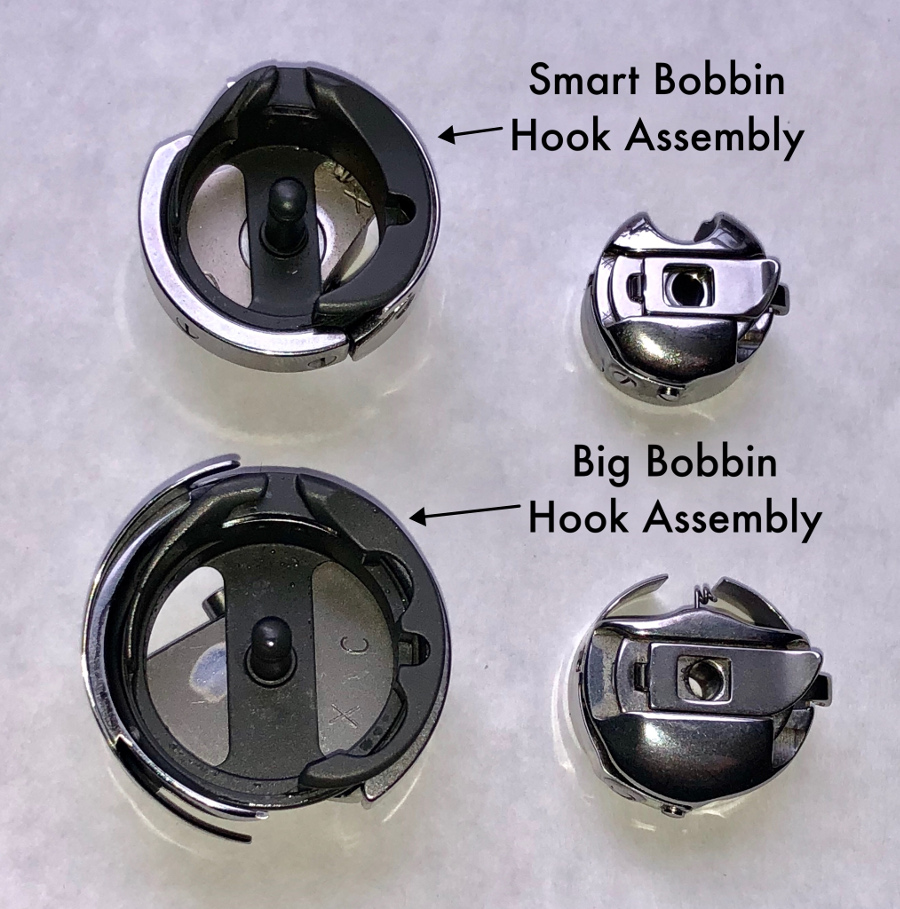 Both have advantages for different quilting styles. The APQS Style L Smart Bobbin is a high-speed industrial bobbin, just like you’d find in multi-needle industrial embroidery machines. Smart Bobbins are smaller and more responsive to quick direction changes due to their lighter mass, which reduces tension issues. Quilters who love adding detail, texture and heirloom quilting to their projects typically choose the Smart Bobbin option. The downside is more frequent bobbin changes.

The APQS Style M Big Bobbin option is great for quilters who prefer overall designs and less complex quilting. Style M bobbins hold almost twice as much thread as Style L bobbins (210 yards compared to 110, depending on thread type and manufacturer.) That means a lot more quilting gets done before it’s time to change the bobbin. However, its larger mass and inertia make it less responsive for detail quilting where quick direction changes can impact tension.

To put it another way, compare how long it takes to stop a small car compared to a semi-truck, and how much energy it takes to get both of them moving again. The small car can zip around corners while the semi needs wide turns to make it. The car can stop quickly at a red light, but the semi’s inertia causes it to take much longer to stop. It also takes much less force to get the car moving again than it does the semi. But the car will run out of gas far sooner than the semi will!

Choose the bobbin size for your machine based on the quilting style you enjoy. (But don’t fret—if you decide on one style for your new APQS machine and later change your mind, it’s possible to make the switch for just the cost of the parts.)

With different bobbin sizes come different bobbin types. Metal bobbins were once common in industrial sewing machines and longarms. Since they’re made from bronze or steel, they are also heavy. They work well with thick thread because the strong sides prevent warping when winding the thread on the bobbin, but the bobbin’s weight can make it harder to regulate tension. Heavy bobbins (like in our semi-truck example) take more force to get them to rotate, and more force to get them to stop.

Aluminum bobbins have replaced metal bobbins as the “go to” for quilters who like winding their own bobbins. They are light weight, which helps reduce bobbin backlashing and the dreaded “bird nests” on quilt backs. Even when filled with thread, aluminum bobbins are close in weight to cardboard bobbins. That means bobbin case tension adjustment will be minimal when switching between the two bobbin types. 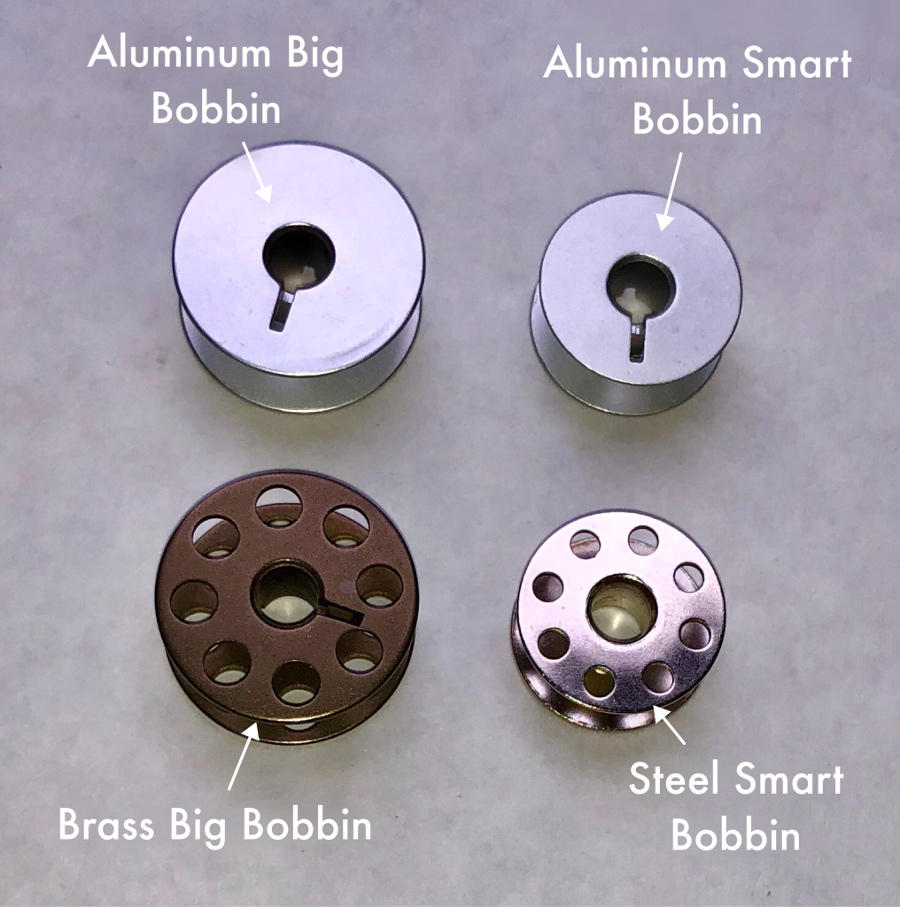 New APQS machines ship with a turbo winder that has a built-in tensioner, which makes winding bobbins fast and easy. But if convenience is your middle name, then pre-wound bobbins may be right up your alley. These bobbins are “one and done”—once the thread is gone, you throw away the bobbin. Color choice is more limited with pre-wound bobbins, but often one thread shade can blend with several different colorways.

Factory-wound bobbins are wound much tighter and hold anywhere from 20-30 more yards of thread than self-winding. The thread is also typically thinner (60-weight), which increases the yardage that will fit on the bobbin. These bobbins are available with cardboard or plastic sides. However, it’s best to stick with cardboard sides in longarms. Plastic pre-wound bobbins can overheat or warp in the bobbin case and cause issues with tension and stitch quality. 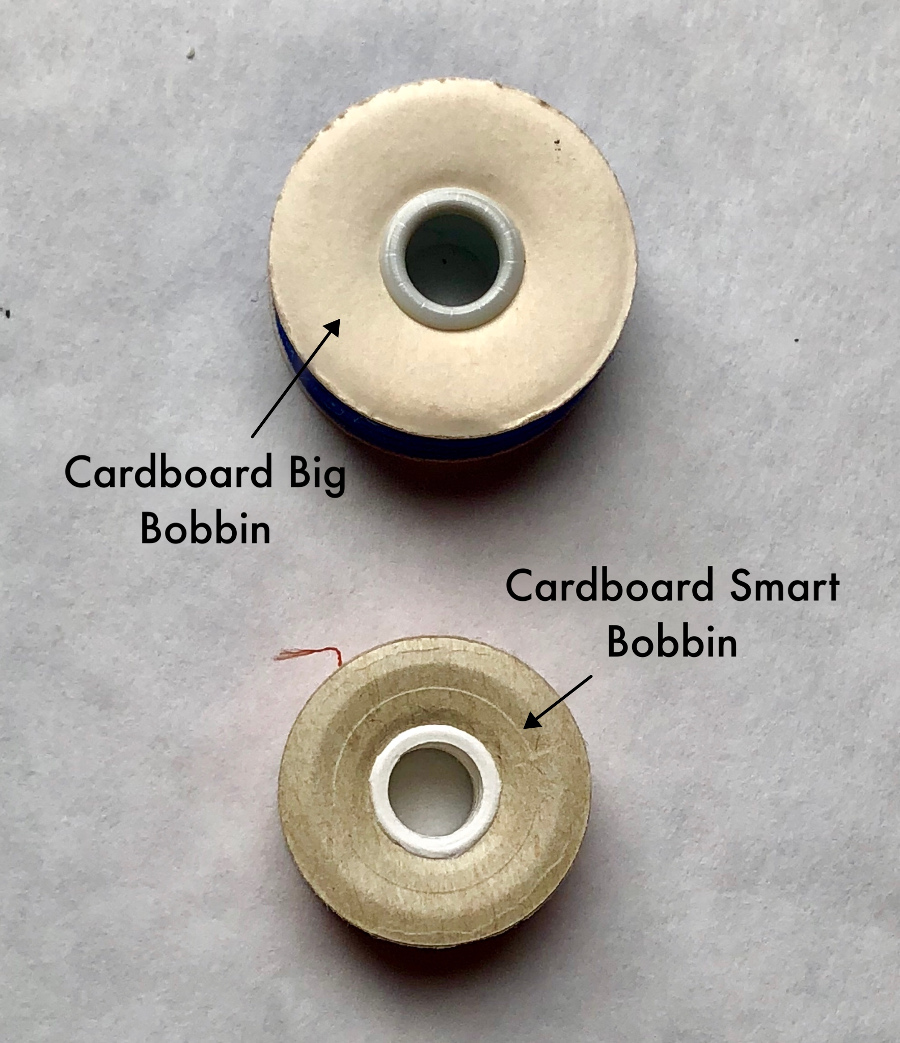 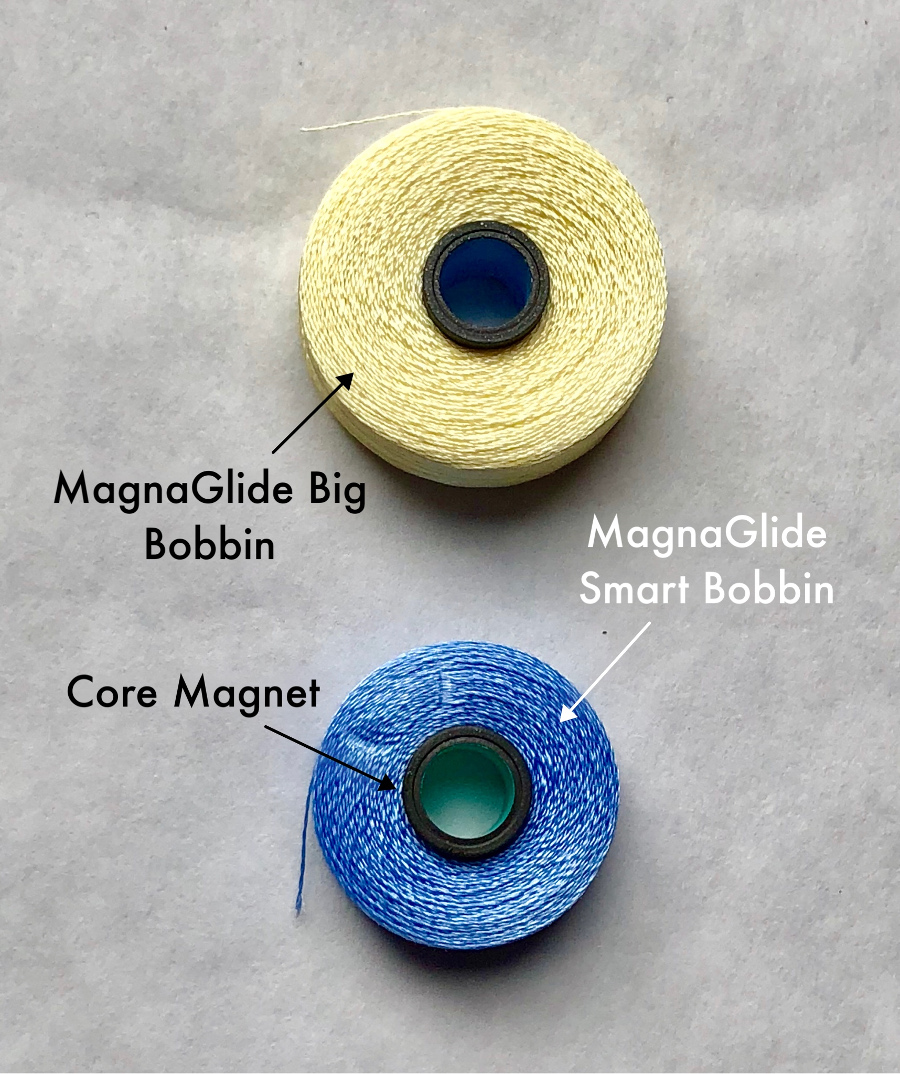 Different bobbin styles and thread types may require some tension adjustments on your bobbin case. To learn more about how to adjust it on your APQS longarm, click here. Ultimately, choosing which bobbin type is right for you may come down to a simple decision—would you rather spend time winding bobbins or spend time shopping for bobbins? 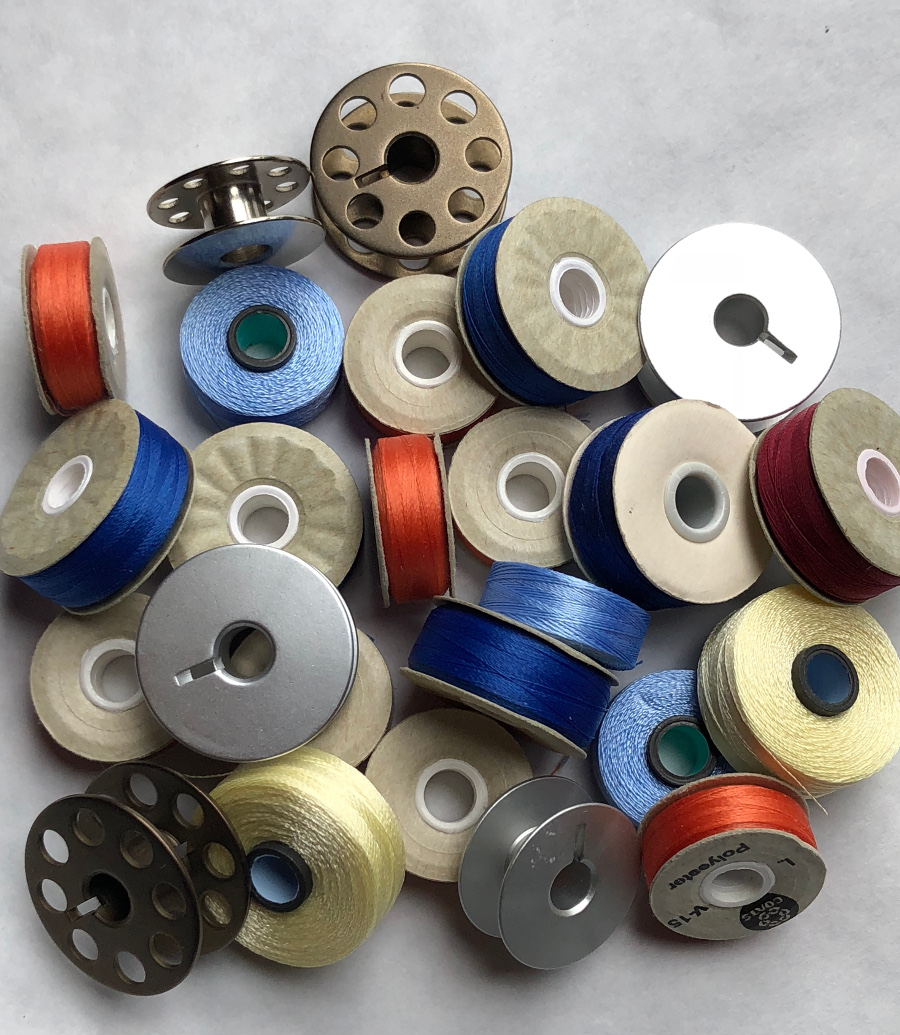 Dawn Cavanaugh
Dawn Cavanaugh is the Education Director at APQS.
Blue Star banners - what are they?
If you know someone in the military, check out this short history and free pattern to honor your soldier!
Keep reading >
Do you really HAVE to stitch in the ditch?
Quilters can make a case for both a "yes" and a "no" answer...
Keep reading >
What's the difference between bobbins?
If you are a little bit of a sleuth, you can find several different bobbin types on the market today.
Keep reading >
APQS Video Tutorial: Flame Meander
This longarm quilting design is more masculine in nature and could easily be an all over edge-to-edge design.
Keep reading >