The story behind the quilt – Grace’s quilt

When we posted a picture of the quilt Salene Ledger’s six-year-old daughter quilted to the APQS Facebook page at the beginning of July, it got LOTS of response. Comments ranged from praise and amazement to encouragement. The post was so popular that we decided to give Salene and her daughter, Grace, a call to learn more about the quilt and the process of making it.

Salene and Grace live in Edmonton, Alberta in Canada with the rest of their family. When we reached them on the phone they had just gotten back from a road trip to Mt. Rushmore. Salene, who works with special needs kids, is the owner of an APQS Millennium quilting machine with Quilt Path.

Tell us about how you got into quilting.

Salene: I’ve actually only been quilting for about four years. I don’t have anyone in my family who quilts, but I’ve always liked embroidery and cross stitching. One time I made an embroidered blanket and thought it would be nice to quilt the back of it – and that’s what prompted me to want to learn. When I saw how much it costs to have someone else quilt for you, I thought – I could do that! I ended up buying a mid-arm quilting machine and used it for about two years to teach myself how to quilt. About a year ago, I decided to upgrade to an APQS Millennium. The APQS Canada store (Sparrow Quilting Co.) is only about six blocks from my house and that played a huge role in me picking the Millie machine.

Grace is only six. How did she end up making a quilt?

Salene: She found the pattern (“Anna’s Starflake” by Nancy McNally from the Love of Quilting magazine July/Aug 2016) in one of the many quilt magazines that I’ve got all around the house. She wanted me to make it, but I suggested that she should try and make it instead. She mulled it around for a bit and decided to give it a try.

She chose all the fabrics and paper pieced every single block by herself. I helped her with the pinning, but she did all the sewing herself on an old Janome sewing machine I had. It took her a little over a year to sew all the pieces – I like to joke that we made the quilt 15-minutes at a time … her attention span just isn’t that long yet! 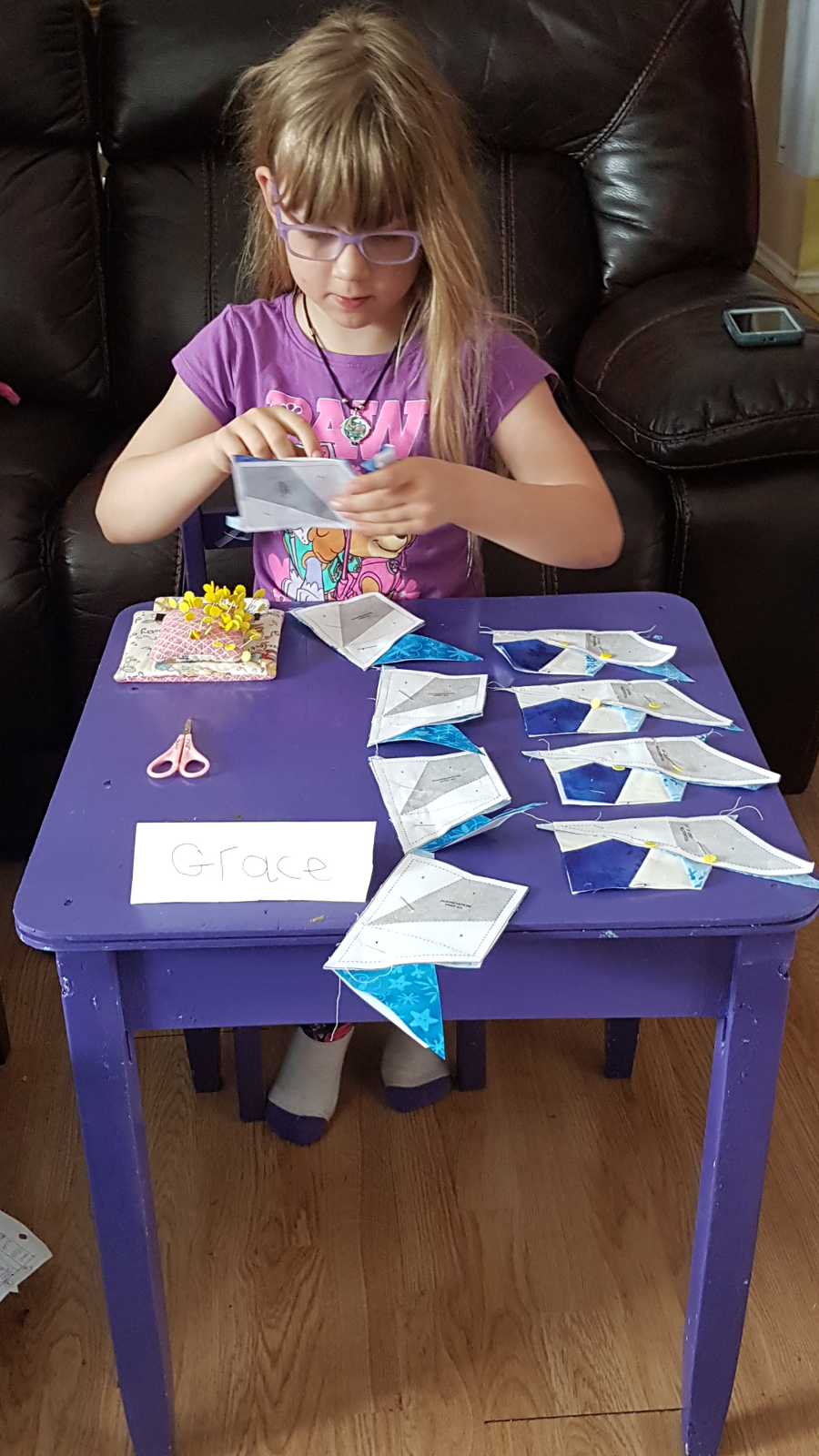 How did you two tackle the quilting?

Salene: One day we were playing around with Quilt Path and I was showing her how you could make snowflakes using the mirror function of the program. She thought that was pretty cool and started making all these snowflakes. I told her that if she made enough we could use that as the pattern for her quilt. That’s what we ended up doing – she loved it! 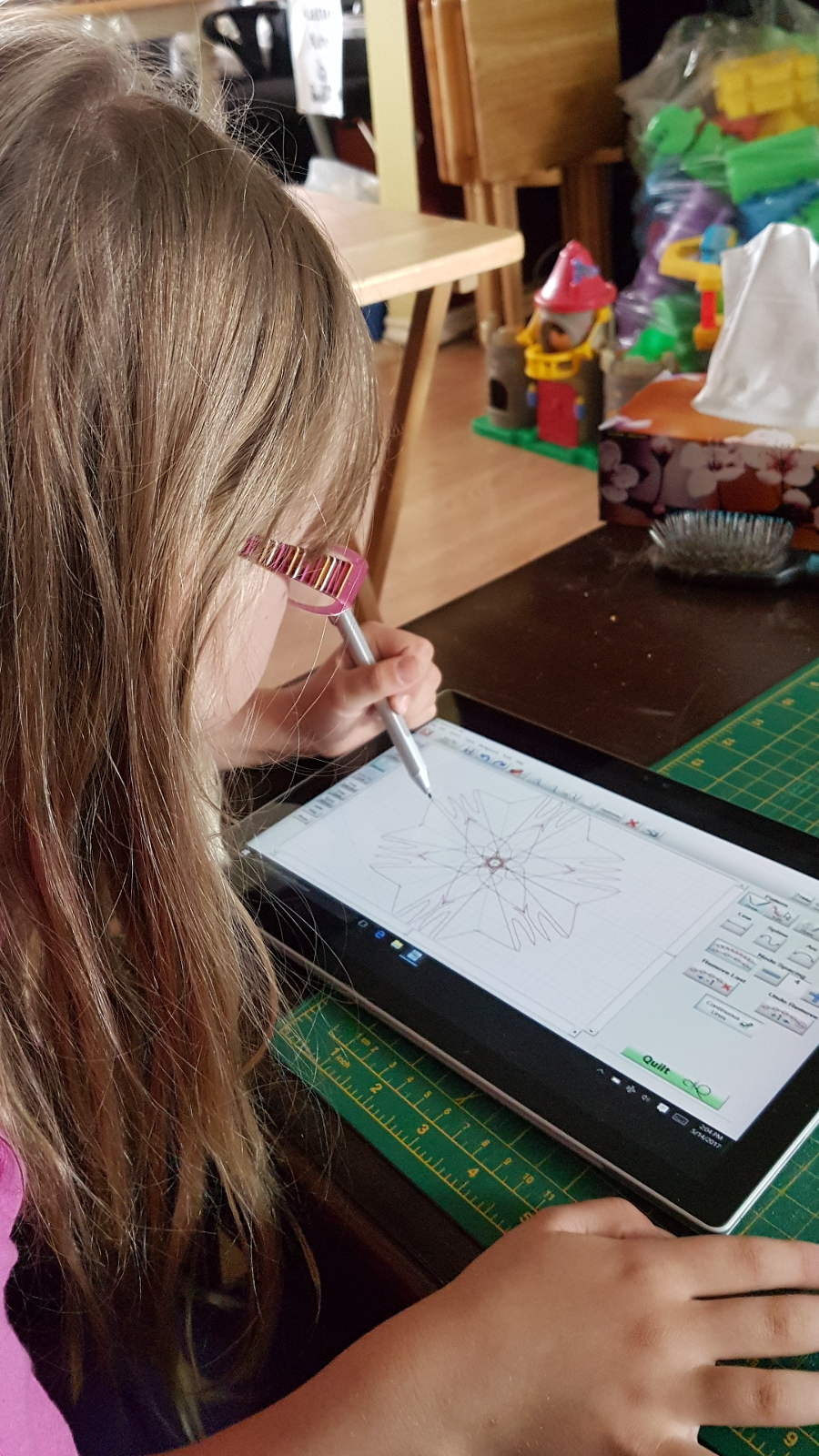 Grace: I liked doing the snowflake pattern. You just put (the machine) where you want it to start and then you press go and it quilts it for you. Then, when it beeps, it’s done!

Salene: When we finished the quilt, it was coincidentally right around the time my quilt guild, the Edmonton & District Quilters Guild, was having its quilt show. So we decided to enter the quilt and she received a ribbon for her efforts – it was great timing. I keep telling her – I’ve been making quilts for four years and you’re more famous than I am! 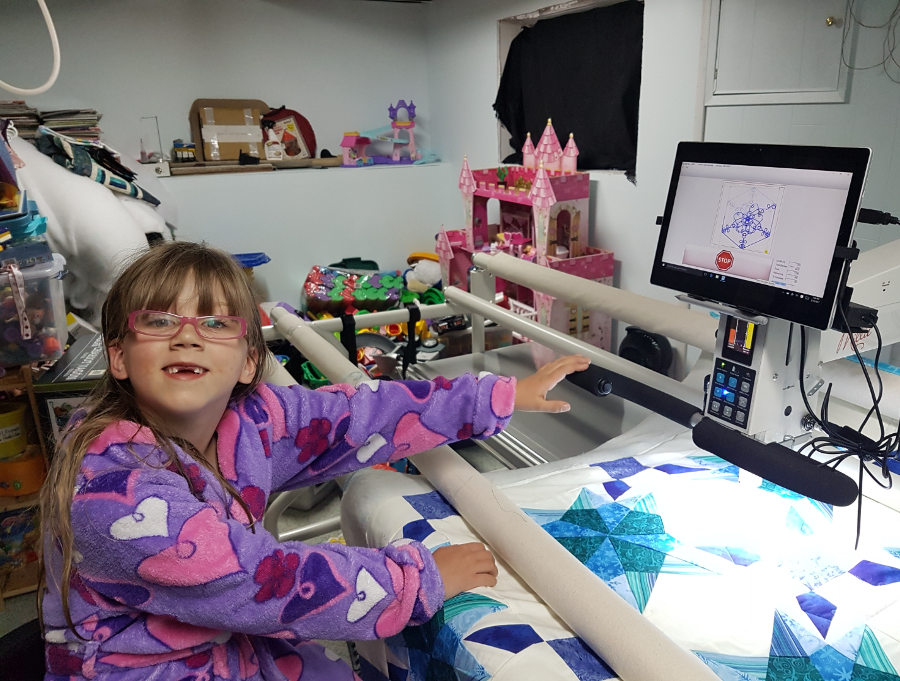 Are you working on another quilt, Grace?

Grace: Yes. It’s going to have gemstones on it and has dark yellow and light yellow (fabric).

Salene: It’s another paper pieced one. She picked out all the fabric at a quilt shop we found on our road trip.

We can’t wait to see what you quilt next, Grace! 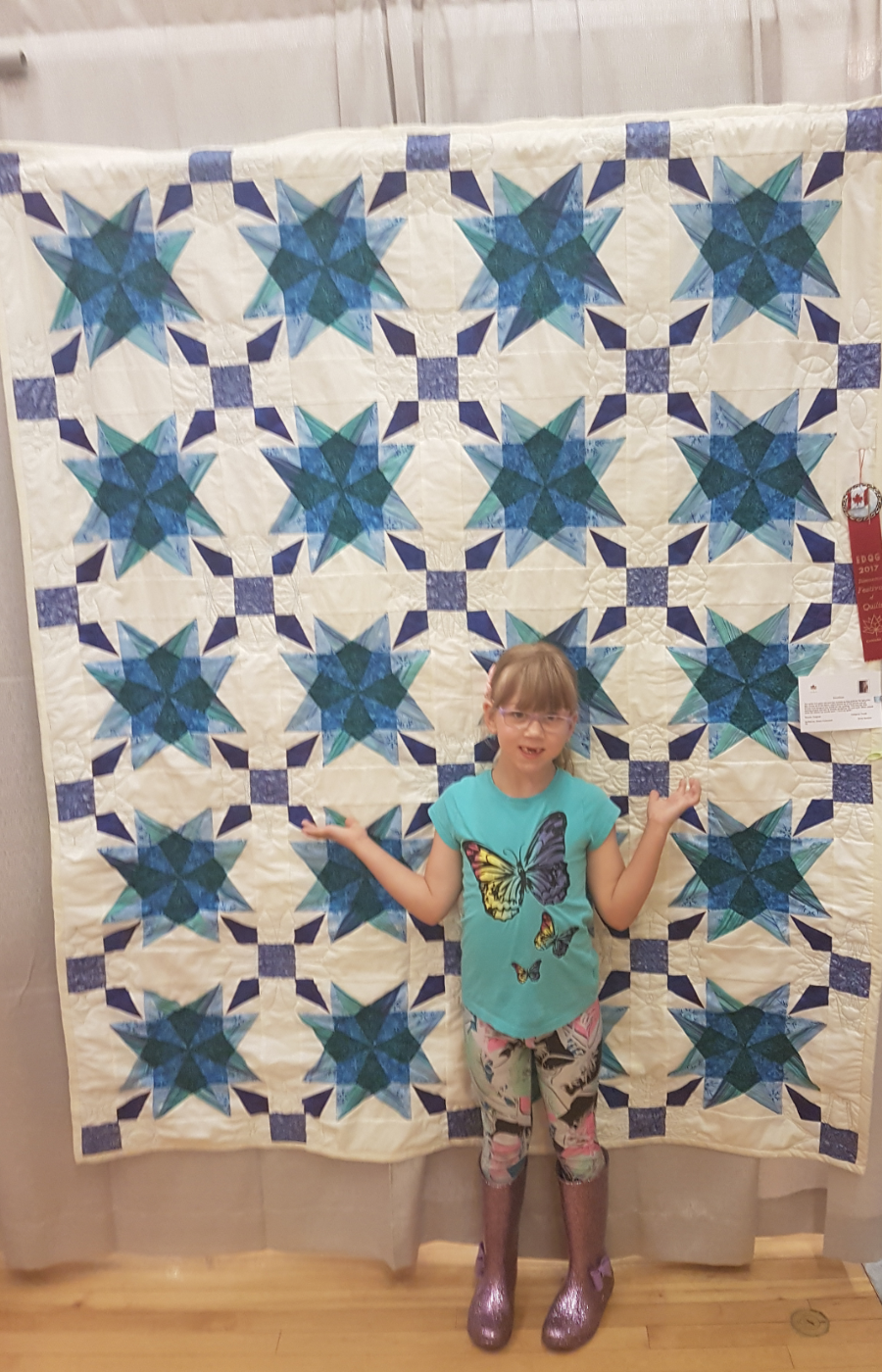 APQS Team
This post was written by members of the APQS marketing team.
APQS Video Tutorial: Sea Foam Filler
In this APQS video tutorial, APQS Dealer and Educator Angela Huffmann shares a romantic and flowy design called Sea Foam Filler. It looks great on landscape quilts when you want to emulate the look of water or waves. It also looks fantastic behind applique.
Keep reading >
The story behind the quilt – Grandmother’s Flower Garden
When we saw Beatrice Rieske’s post in the APQS forum about the Grandmother’s Flower Garden quilt she recently completed for a customer, we thought it was stunning. As a result, we decided to give Beatrice a call to learn more about the process of making this stunner!
Keep reading >
From famous quilters to soap stars, meet some of the quilt celebrities who own an APQS
Some of the top quilting artists in the world have chosen APQS as their longarm machine of choice. We talked to some of the famous faces in the quilting world to see what drew them to quilting and to APQS longarm quilting machines.
Keep reading >
APQS Video Tutorial: Pointed Peacock Party
In this APQS video tutorial Angela Huffman, APQS dealer and educator, shares a filler design that's based on a headband filler (or paisley filler or peacock filler). We just added a little point to it. We call this design the Pointed Peacock Party filler.
Keep reading >