Quilting the Quilt: What’s in a word?

Stipple |stip-uhl|
verb (stippled, stippling)
1. To engrave or draw by means of dots or small touches.
2. To make small short touches that together produce an even or softly graded shadow.

Quilters frequently use stipple and meander interchangeably when describing a quilting design that wanders aimlessly across the fabric. But more than one quilter has been disappointed after picking up a quilt from the longarm quilter, only to discover that their definitions did not match!

Is this stippling or meandering? 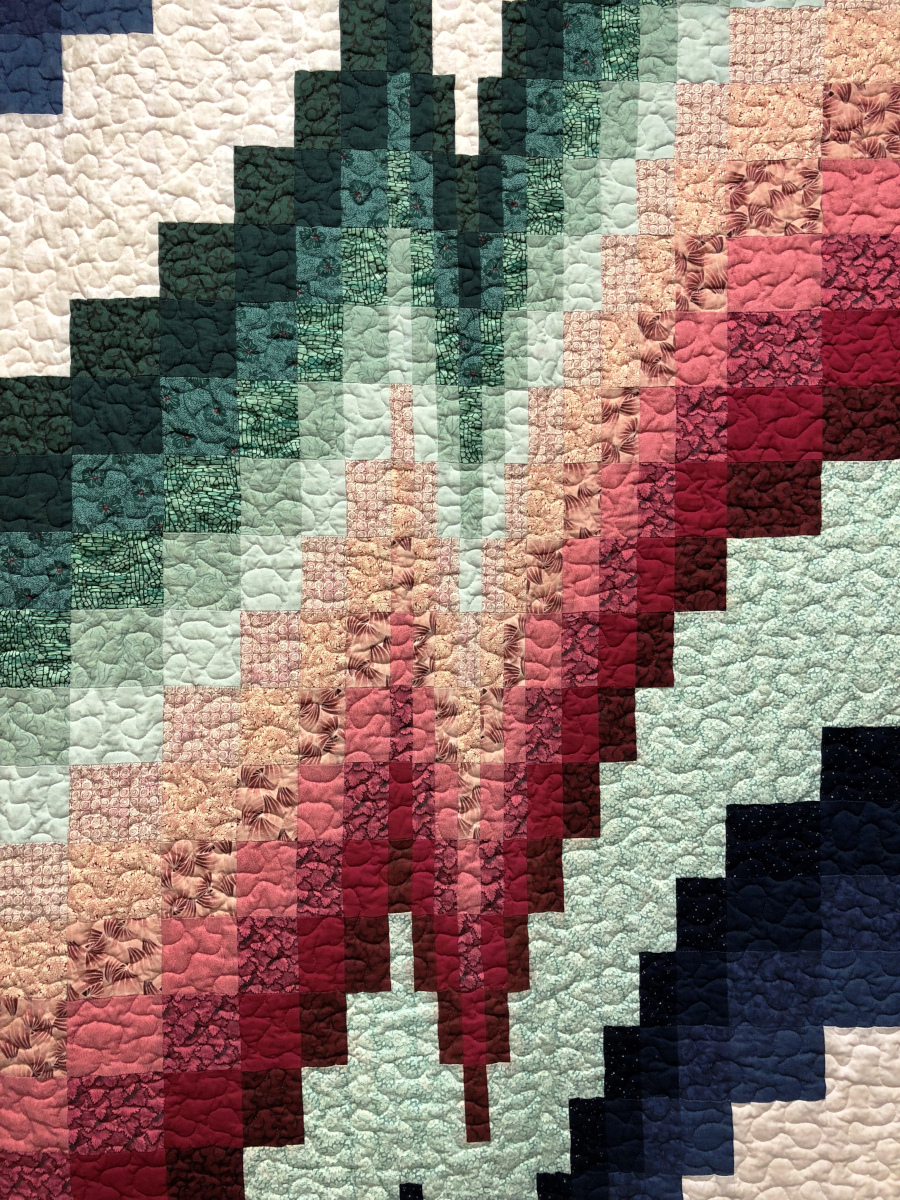 If we follow those Merriam-Webster Dictionary definitions to describe quilting, size is the differentiator. Stippling can be executed using a meandering pathway, but stippling is small. Sometimes it can be so tiny that you can barely see the pathway at all! Stitching that small is called “micro stippling.” Stippling is typically used to fill in background fabrics, to add texture, or to highlight appliqué designs. It can make feathers and block designs pop out and come to life—especially if the batting has enough loft to fill up the feathers while the stippling compresses it all around them.

Using contrasting thread for your stippling adds another design layer for your quilt, fitting the word’s definition by creating “an even or softly graded shadow.” Notice how the gold thread used for stippling this border makes it look like the fabric is actually printed with the design? 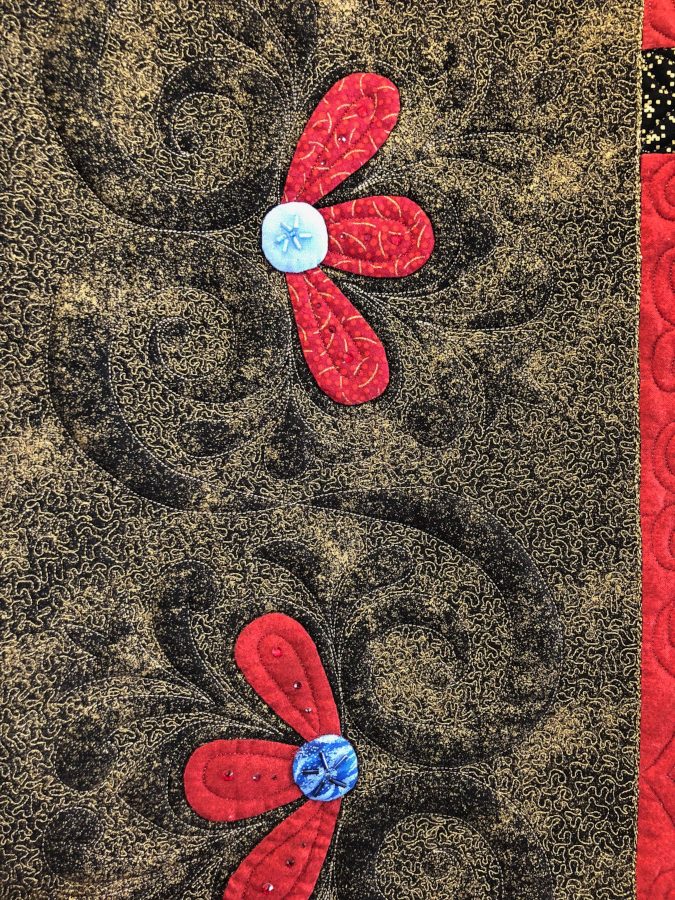 If “stippling” means a really, really small meandering design, then what size does it have to be before it becomes “meandering” and not stippling? Great question! The answer is, it’s a matter of personal opinion. There is no international reference that magically defines
when a wandering quilting line is too big to be called stippling or too small to be called meandering. But we can get us all closer to the same page by defining the pattern according to how it is used.

Think of meandering on a quilt as an edge-to-edge type of design. The stitching line wanders aimlessly all over the quilt’s surface without stopping for anything in its way—it marches right through borders, blocks, sashings, and even appliqué. By contrast, stippling pays attention to where it’s going. It stops along feather edges, sneaks in and out of block designs, and dodges around appliqué shapes.

If that image still isn’t helping, then it’s time to use a visual reference. Grab a piece clear vinyl and tape off the edges with painter’s tape so you can see where the vinyl ends. Lay the vinyl over your quilt, and then use a dry erase or transparency marker to draw your meandering on the vinyl to test its scale compared to your quilt. Adjust the design as needed. Of course, be careful not to draw on your quilt, and move the vinyl away from your quilt before removing the markings.

To help my customers visualize how different meandering sizes could look on their fabric, I created a sampler that included jumbo meandering all the way down to tiny stippling. That left no room for personal interpretation or misunderstandings. The sampler also helped me to be more consistent from the beginning of the quilt to the end. I would fold the sampler so the client’s chosen size was the only one visible. Then I kept it near the quilt and looked at it frequently as I worked, ensuring that my quilting was matching its scale. You can see my sampler’s different sizes below. The ruler in each photo helps you judge each one’s scale. 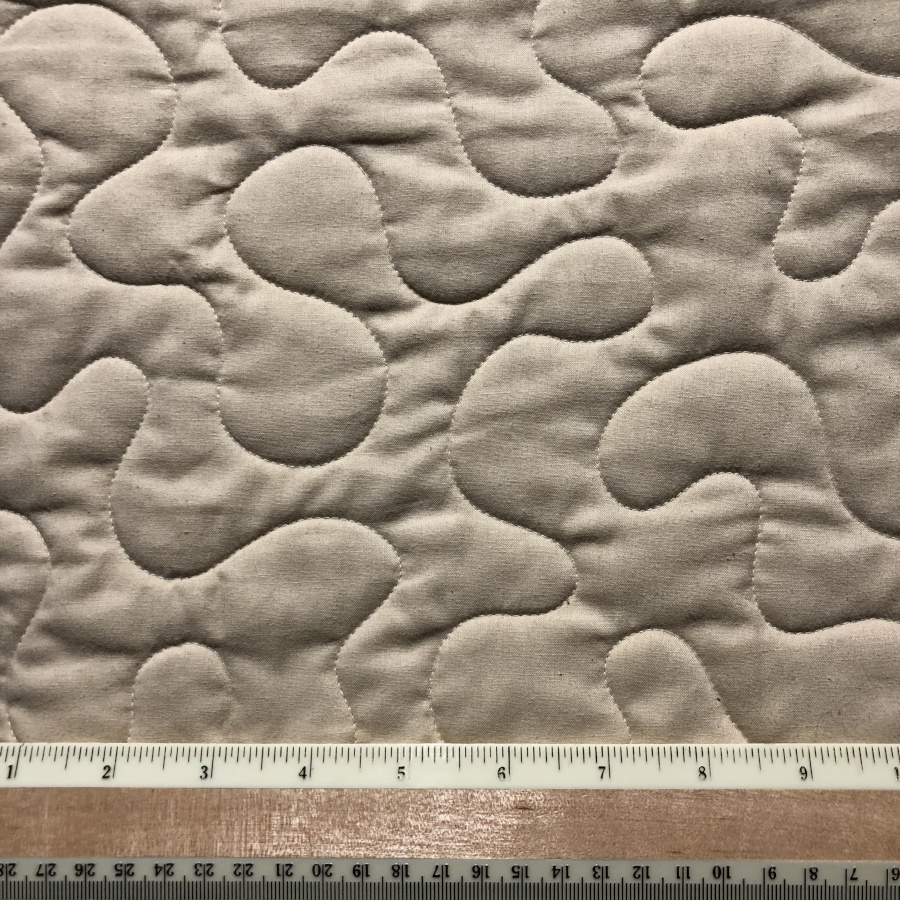 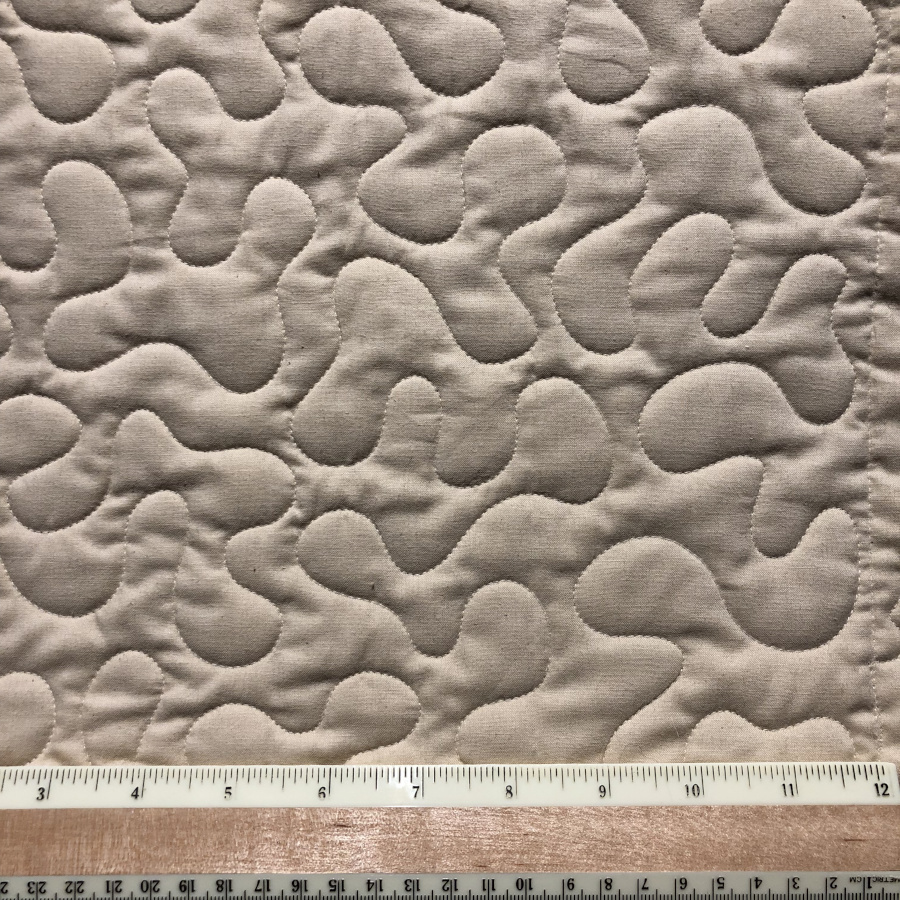 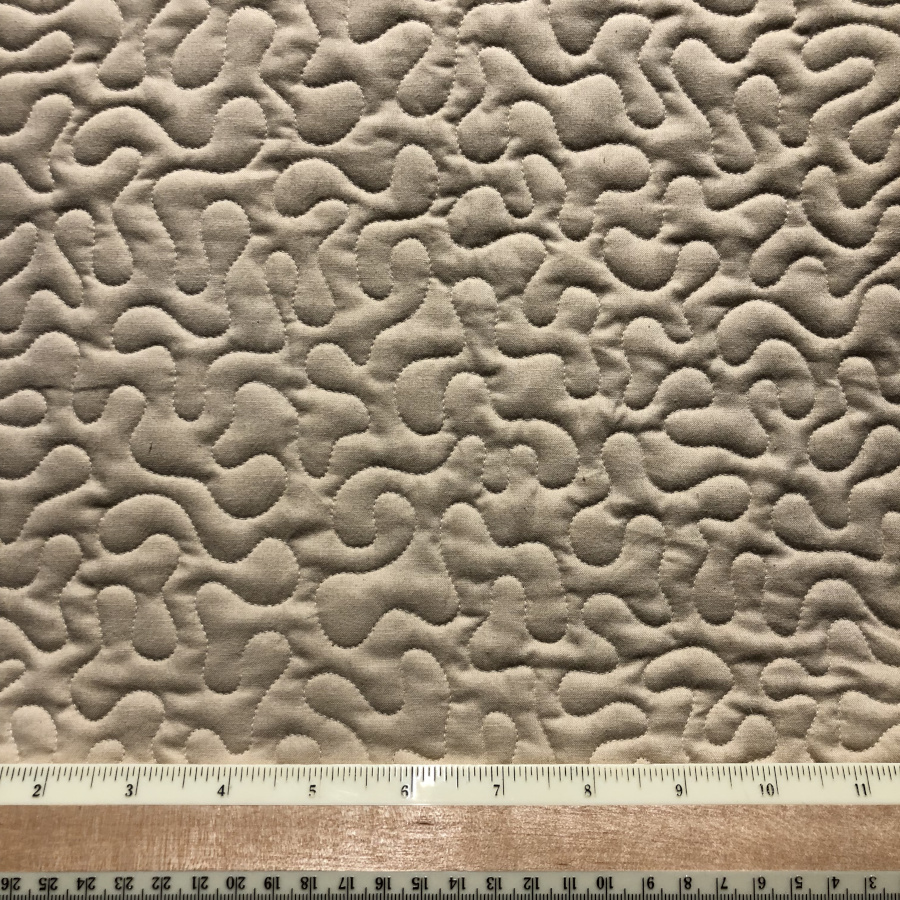 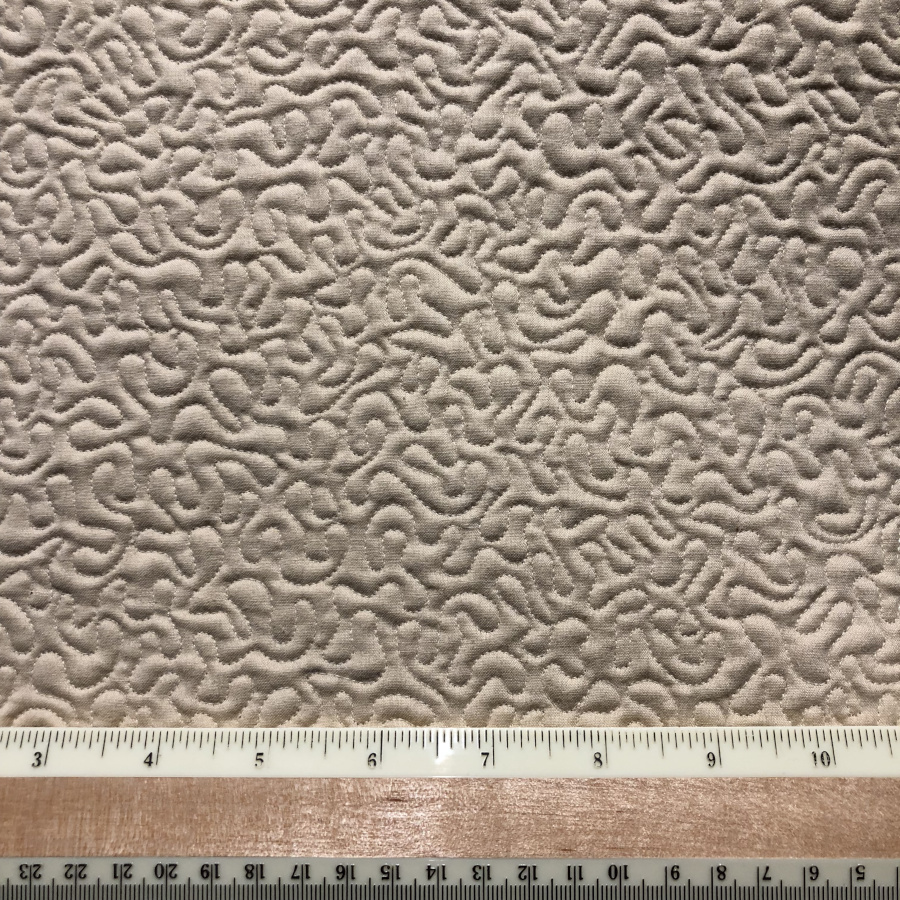 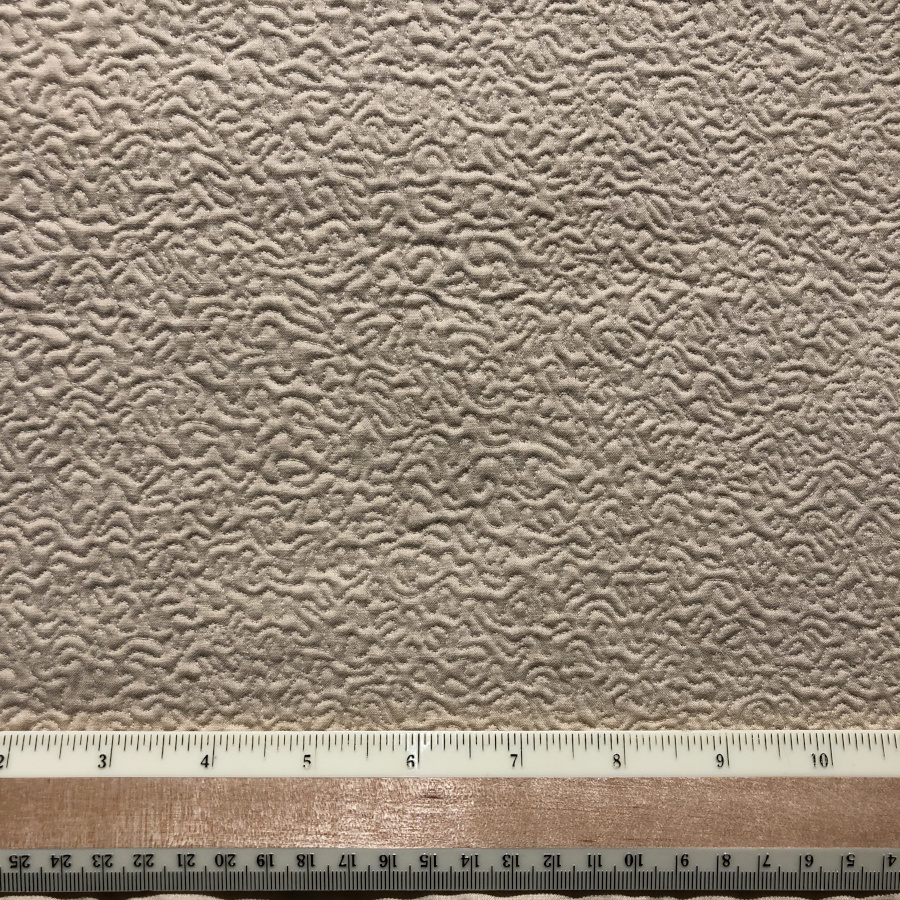 Big meandering lines cover a quilt quickly and are simple to do. Just imagine that you’re carving out puzzle pieces as you wander over the quilt and go with the flow! But if you want to get your stippling designs really small, adding Microdrive handles to your longarm machine gives you ultimate control. With your hands down close to the needle, it’s like drawing with the tip of a pencil instead of trying to draw details while holding the pencil near the eraser. 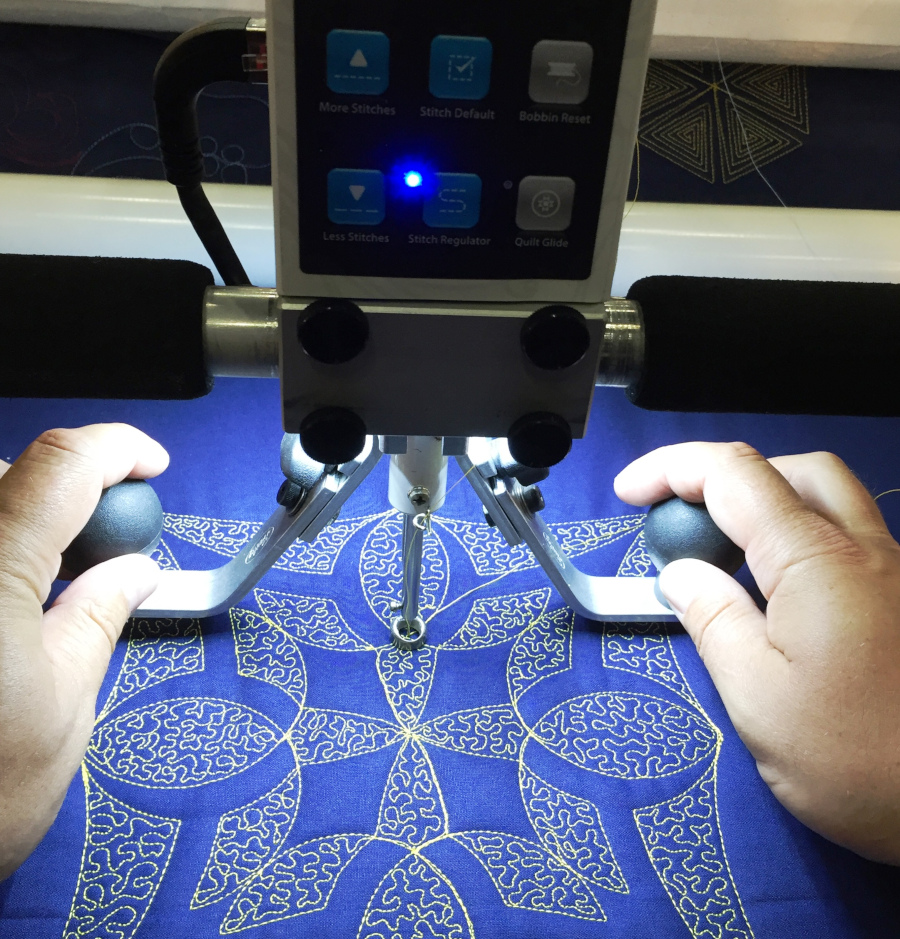 Quilters get all hung up over some “rule” they once heard that decreed “meandering should not cross over itself.” I don’t know where that dictate came from, but it’s time that it stop scaring quilters from trying at all. If you start meandering your quilt and you happen to cross over a line or two—so what? Will the quilt be less warm? Will it fall apart? Will your son or daughter love it less? Of course not! Throw caution to the wind, and cross over a few more lines along the way. Then they become part of your own personal, one-of-a-kind design. Stop worrying that your quilting has to follow arbitrary rules. The only person you have to please is yourself, and the only rule truly worth following is the one that says, “Have fun!”

Dawn Cavanaugh
Dawn Cavanaugh is the Education Director at APQS.
APQS Video Tutorial: Curl and Kick
In this video, Angela Huffman, APQS Dealer and Educator shares a modern border or sashing design we call the "Curl and Kick."
Keep reading >
APQS Tutorial: Custom Flying Geese Border
Sometimes it can be difficult to find the continuous path of certain pieced border designs. Here is a great way to tackle a flying geese border.
Keep reading >
Free quilt pattern: Modern Squares
“Modern Squares” leaves ample white space for quilting but also tells a subtle story. Happy quilting!
Keep reading >
Quilting the Quilt: Now you see it, now you don't
When you’re faced with choosing the “lesser of two evils,” wouldn’t it be nice to have a third option pop up that suddenly saves you? Invisible thread to the rescue!
Keep reading >