Quilting the Quilt: Men who quilt

Right or wrong, quilting has been perceived as “women’s work” for centuries. While more and more men are discovering the craft, according to the 2017 “Quilting in America” study conducted by The Quilting Company, in partnership with Quilts, Inc., only one percent of the estimated 7 to 10 million quilters are male.

Even though their numbers are small, the male quilters are finding ways to connect. Men from all over Canada recently attended an all-male retreat organized by “The Canadian Male Quilter Group,” and several Facebook groups are devoted to “Men Who Quilt.”

When Michael Smith started quilting, he felt like he was the only guy in the entire world to like quilting. “I’m sometimes asked in quilt shops if I’m there with my wife, or if I’ve been sent in with a list of things to buy for her.”

Michael admits that shop employees have become more accustomed to seeing male quilters walk through their doors over the years. “Even though they may jump to the conclusion that I’m ‘just looking for my wife,’ as soon as I start talking they realize that I am indeed a fellow quilter, and that I do indeed know what I’m talking about. Then, they’re ready to talk shop and are eager to help.” 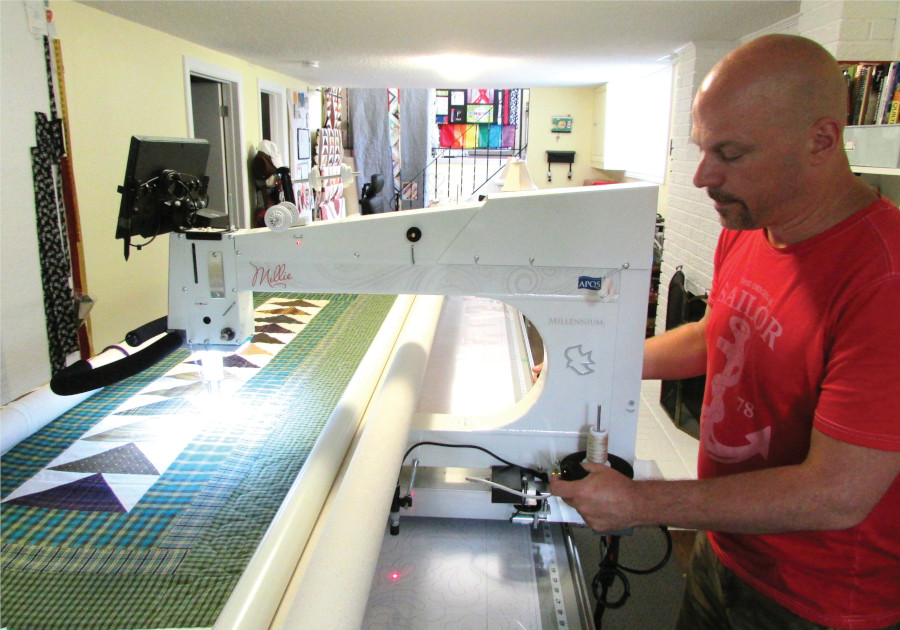 Michael’s quilting journey was inspired by one very special quilter back in 1991. While studying fashion design in college, he tuned in to PBS one day and discovered Eleanor Burns and Quilt in a Day. “My whole life changed at that moment! I was inspired to try making a quilt, which I made from garment scraps left over from my school projects—I was immediately hooked!”

Michael attended Eleanor’s Certified Teacher training course last year, and finally got to meet his idol and tell her how much that one TV episode changed the course of his life. 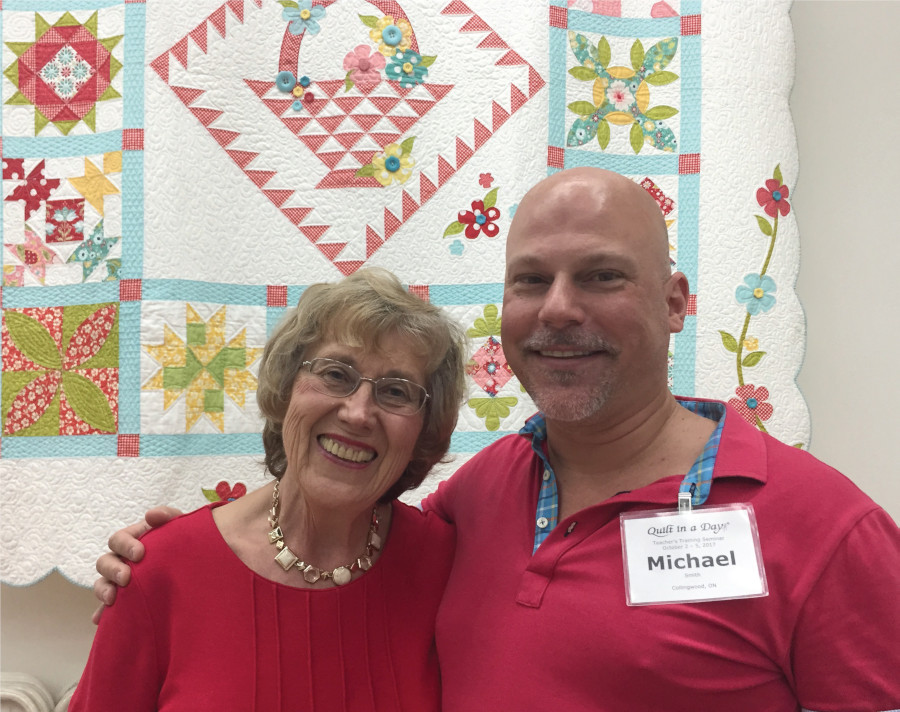 Michael was soon making quilts for all sorts of occasions! To speed up the process and make it more enjoyable, he bought his first APQS longarm machine in 1991, quilting for friends and family. In 2014, he bought an APQS Millie with Quilt Path because he “wanted to do it all—free motion, pantographs, and computer-guided quilting.”

He accomplished at least two of those goals with the wedding quilt he completed for friends. Michael used a paper pantograph to stitch much of the quilt, but left the center bare so he could free-motion quilt the interlocking wedding rings and the background fill. Two layers of batting in the center section helped emphasize the rings, and the directional locks on his Millie allowed him to quilt straight matchstick lines as the background. 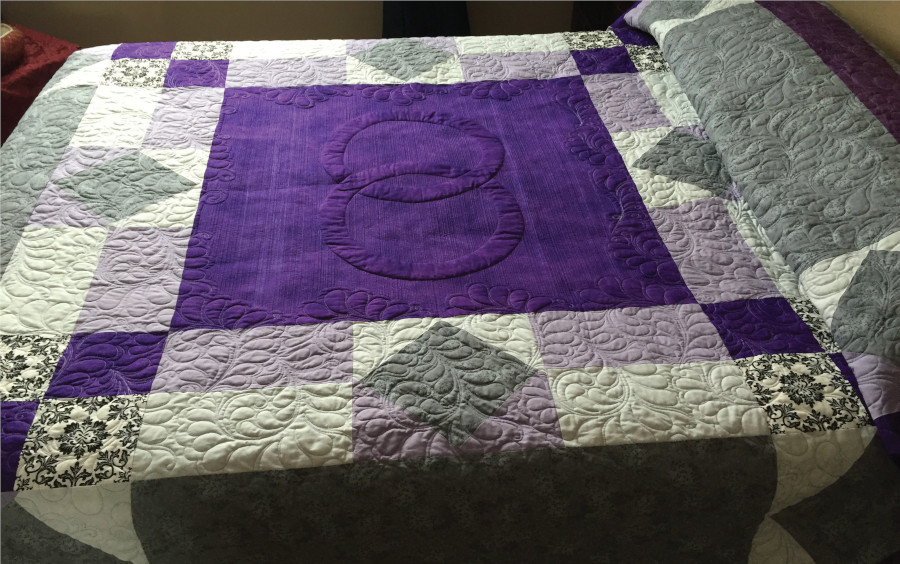 Just like nearly all other quilters, the biggest challenge Michael faces is time—he’s got more ideas than there are hours in the day! He dreams of one day opening his very own quilt shop, where all quilters will be welcome, no matter what their sex, age, religion, or even hair color is!

Tony O’Tool has been around quilting since he was 14 years old, when he earned extra spending money sweeping floors at the APQS factory. He continued working at the factory through high school and college, assembling machines and even moving into the sales department. He served as the national sales manager for several years before following his heart to be a full time youth pastor at his church.

Friends would often tease him when they learned he worked in the quilting industry. “I don’t look like a typical quilter, that’s for sure,” said Tony. Luckily, Tony has broad shoulders and can take the ribbing in stride. He’s just as comfortable walking into a fabric store as he is muscling his way around a basketball court in men’s league.

“When my mother-in-law learned where I worked, suddenly she found lots of quilt tops that needed quilting, and I became the designated quilter!” 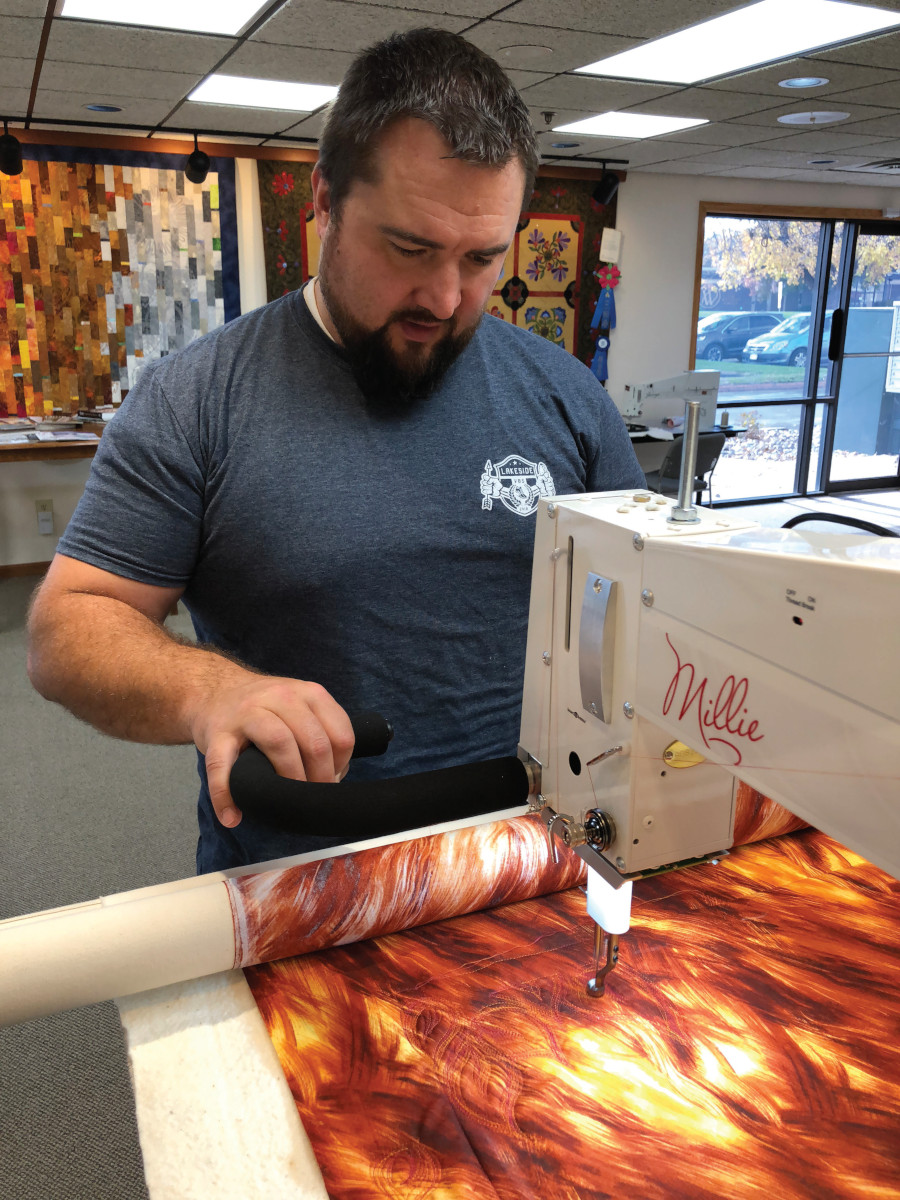 Even though his days are now filled with children instead of quilters, Tony still makes time to quilt. His worship team challenged church members to create art pieces that symbolize a selected scriptural parable. Tony volunteered to quilt a banner to depict his parable (Luke 16: 19-31).

He found the perfect fabric to illustrate the fires of hell, and used variegated thread to thread-paint flames all across the piece. He added eerie souls among the burning flames using black thread and fused lamé fabric. 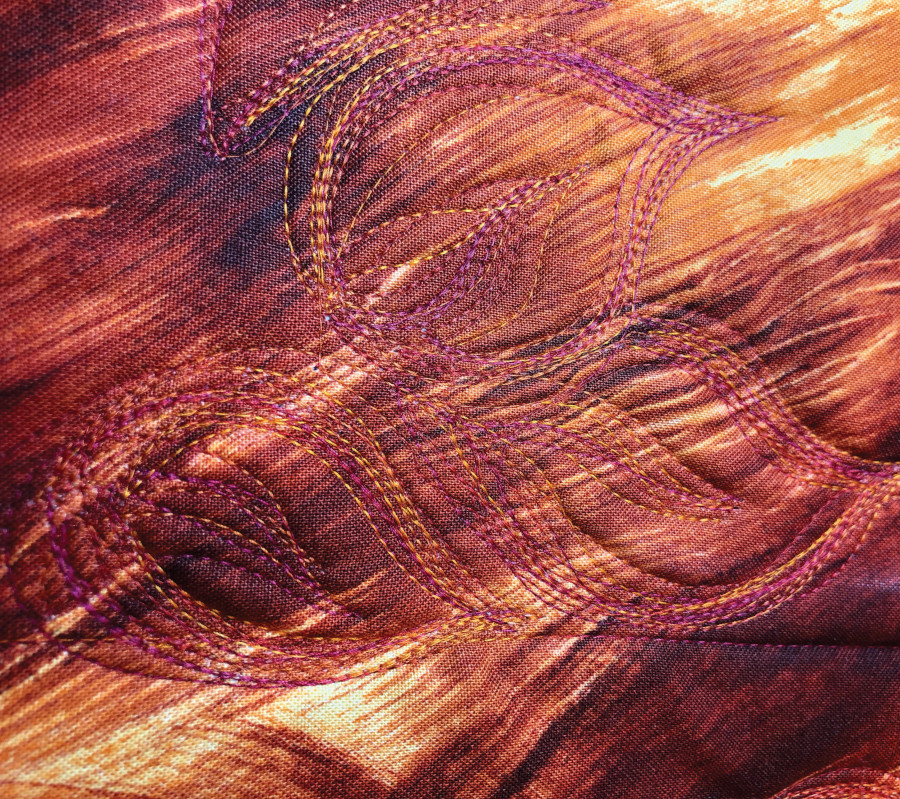 Next he stitched some freehand stars on white fabric, and threadpainted shading details on top of a hand he had fused to the fabric. A layer of sheer organza over the entire white section created an ethereal feel, and he added a few more stars on top of that layer to secure the pieces. A large crystal bead sewn to the banner symbolizes a drop of water falling from the outstretched hand. Finally, he joined the two panels to a black section to illustrate the chasm between heaven and hell.

Next up on his quilting schedule? A T-shirt quilt comprised of shirts from youth mission trips that will hang in the church youth room. Not only will the quilt inspire young people to serve others, hopefully it will inspire both girls and boys to quilt! 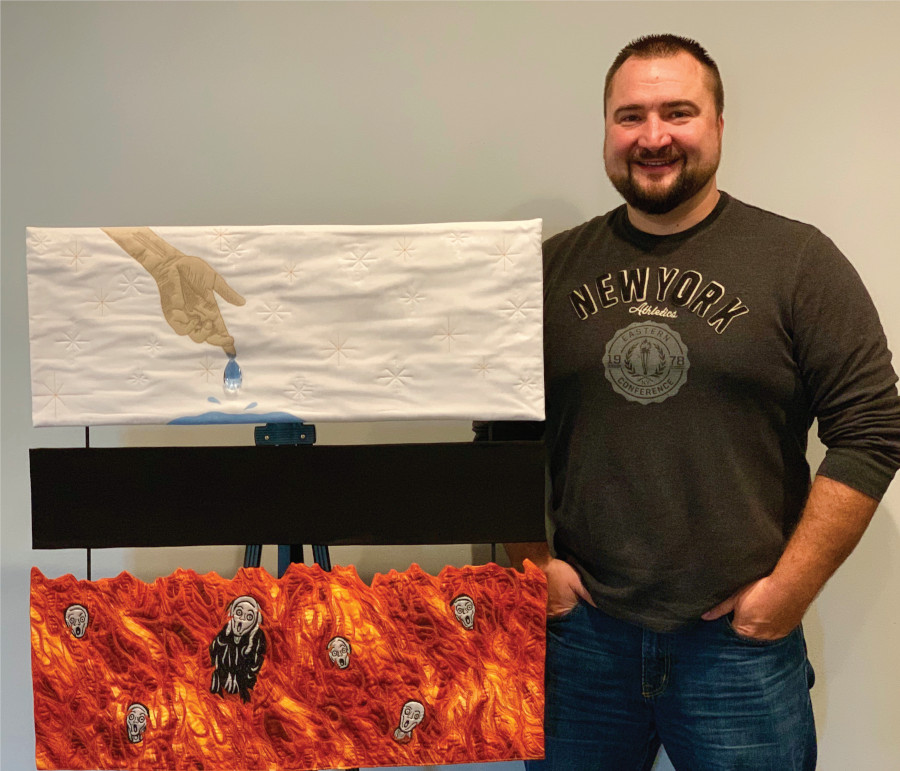 Dawn Cavanaugh
Dawn Cavanaugh is the Education Director at APQS.
Quick Quilt Tops 2021 - We have a winner!
Collaboration results in beautiful quilts! We've quizzed you every step of the way in our Quick Quilt Tops series, picked the winning elements, and finally have a finished product. Enter our giveaway for your chance to win this quilt and a basket full of quilting goodies.
Keep reading >
Quick Quilt Top – Flying Geese: Help us pick a design layout
It's time for YOU to decide which quilting design will make the cut in our Quick Quilt Top series. Vote for your favorite!
Keep reading >
How to quilt feathers – 2 methods
When delving into the world of custom quilting there is one design element that virtually all quilters want to learn to create – feathers! The best part is, with a little practice anyone can create beautiful flowing feathers.
Keep reading >
APQS Video Tutorial: Paisley Border
The paisley is a common design that has stood the test of time.
Keep reading >