Cramped into an economy seat and headed into the third leg of a 22-hour plane ride this past August, I began to wonder what exactly awaited me as I landed on an 8-million-year-old extinct volcano in the middle of the Indian Ocean. The tiny tropical island of Mauritius east of Africa is known for its crystal clear beaches and sugar cane, not patchwork quilting. However, Sadhana Ramanjooloo and the members of Magic Fingers Association are working to change that, and they invited me to help them do it! 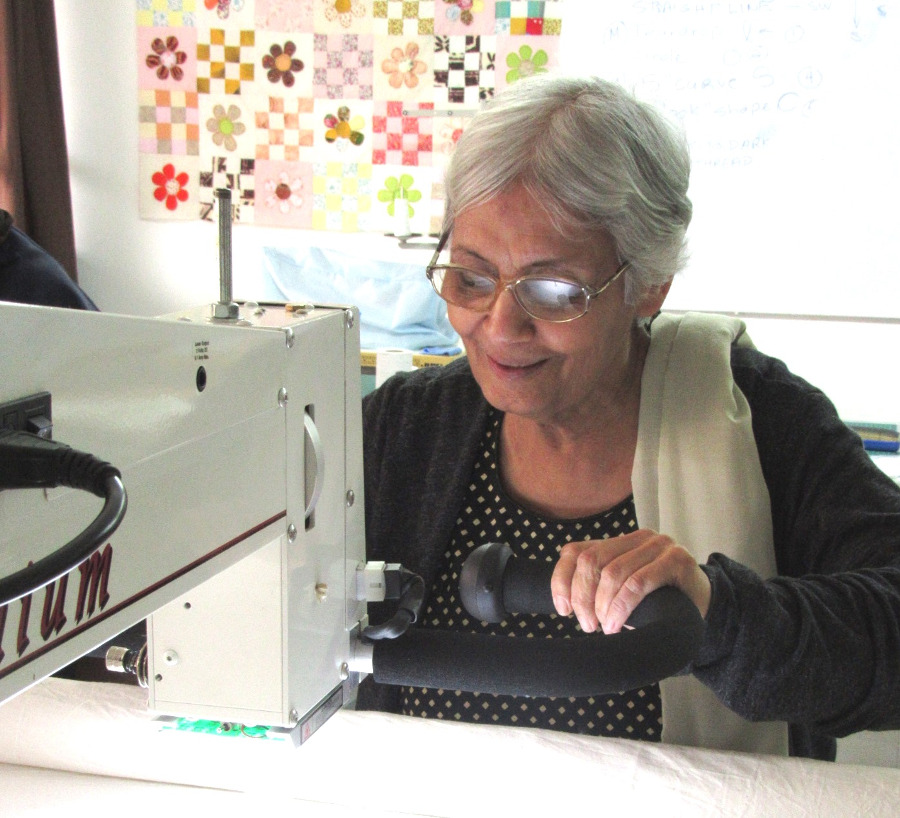 In North America, patchwork quilting has morphed from its humble beginnings where pioneer families sewed scraps together to stay warm into a $3.76 billion industry where the majority of quilts are now made for pleasure, not necessity. But in Mauritius, patchwork quilting is rare. Sadhana first discovered quilting in 1987 when she was smitten by small patchwork cushion at a friend’s home. She immediately began searching for instructions, reading about basic quilting techniques through American magazines and teaching herself through much trial and error.

Then in 2005 Sadhana had the opportunity to coach 13 women in the skill of patchwork quilting at the Mauritius National Women Entrepreneur Council (NWEC). She discovered that many of these women came from low income families, had few marketable skills and could not afford to buy fabric for quilting. So Sadhana began looking for creative ways to help these women get the resources they needed to turn patchwork and quilting skills into income.

Mauritius uses several initiatives to reduce waste and conserve resources. The island is only 720 square miles (just over half the size of Rhode Island) yet its population continues grow past 1.3 million people. Though the island is small, several textile and clothing factories call Mauritius home. 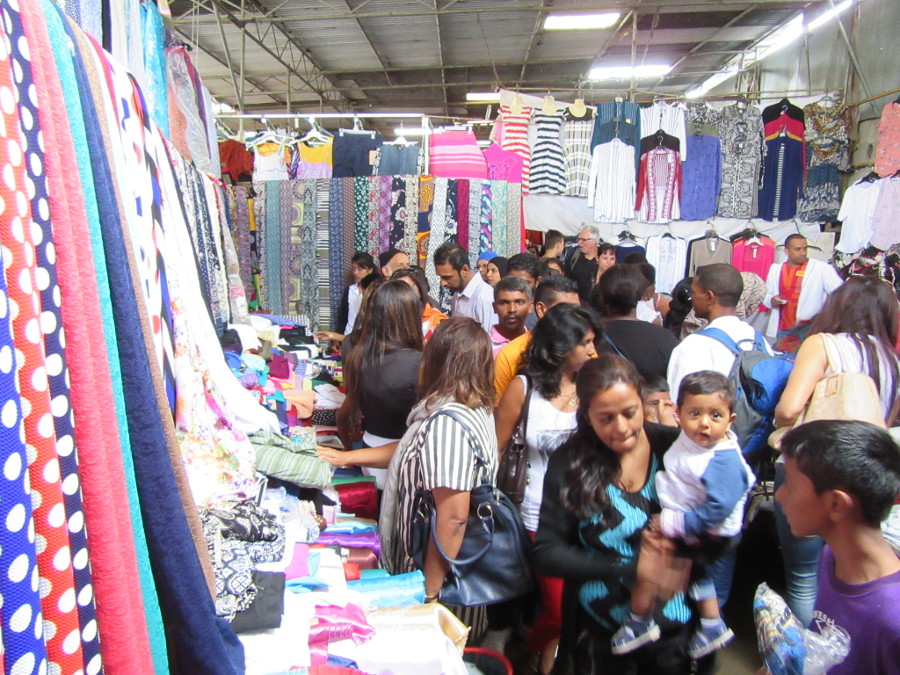 Residents crowd the Textile Market every Sunday in Quatre Bornes to buy everything from underwear to curtains.

Sadhana hit upon the idea of using these companies’ waste or reject fabrics destined for garbage bins as a free fabric resource to further her cause. This inspiration led to winning the Silver Award in the “Innovators” competition organized by the Mauritius National Productivity and Competitiveness Council. The award honored the group’s effort to reduce, reuse and recycle textile waste—a motto for many quilters! 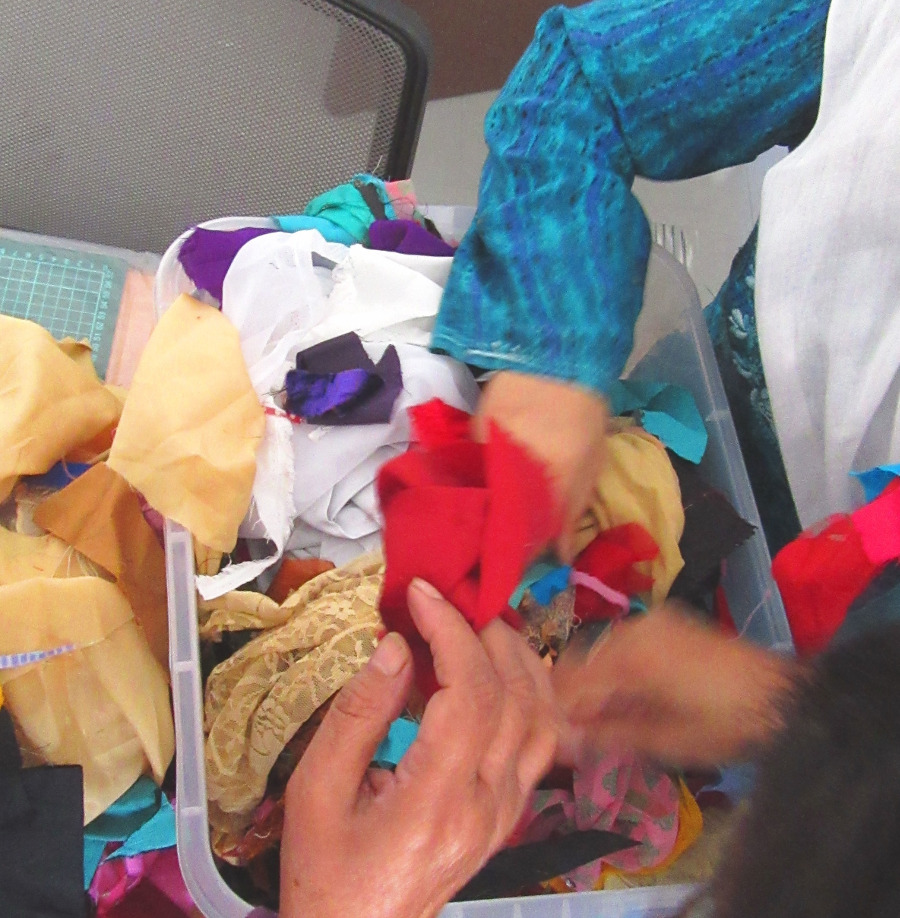 Even the smallest scraps of leftover fabric or batting are saved to stuff soft toys for sale.

Every part of donated fabric is used by the group, including the fabric salvage as you see in this string quilt by Ghislaine Bernon. 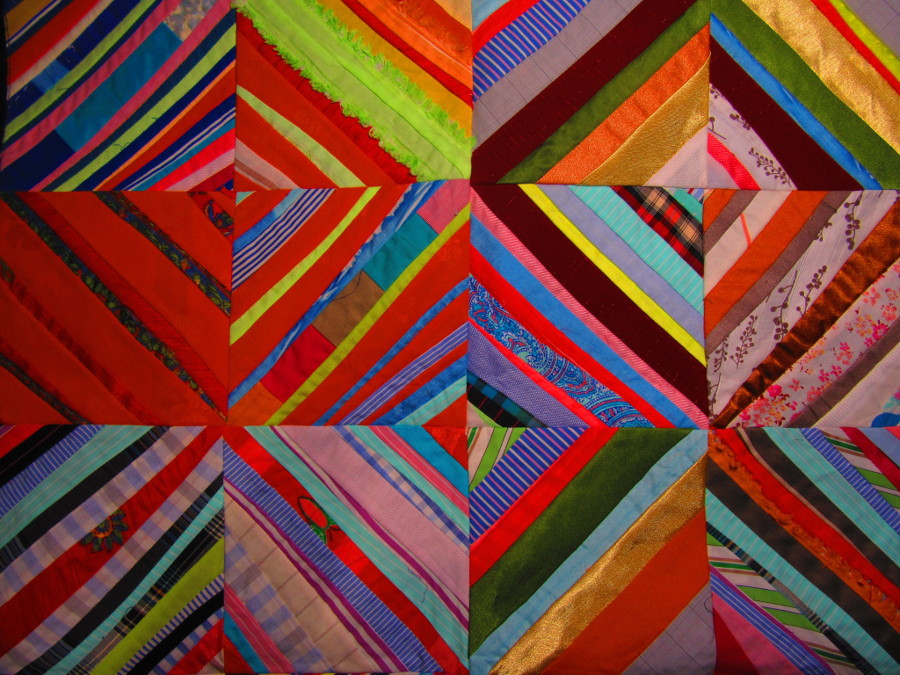 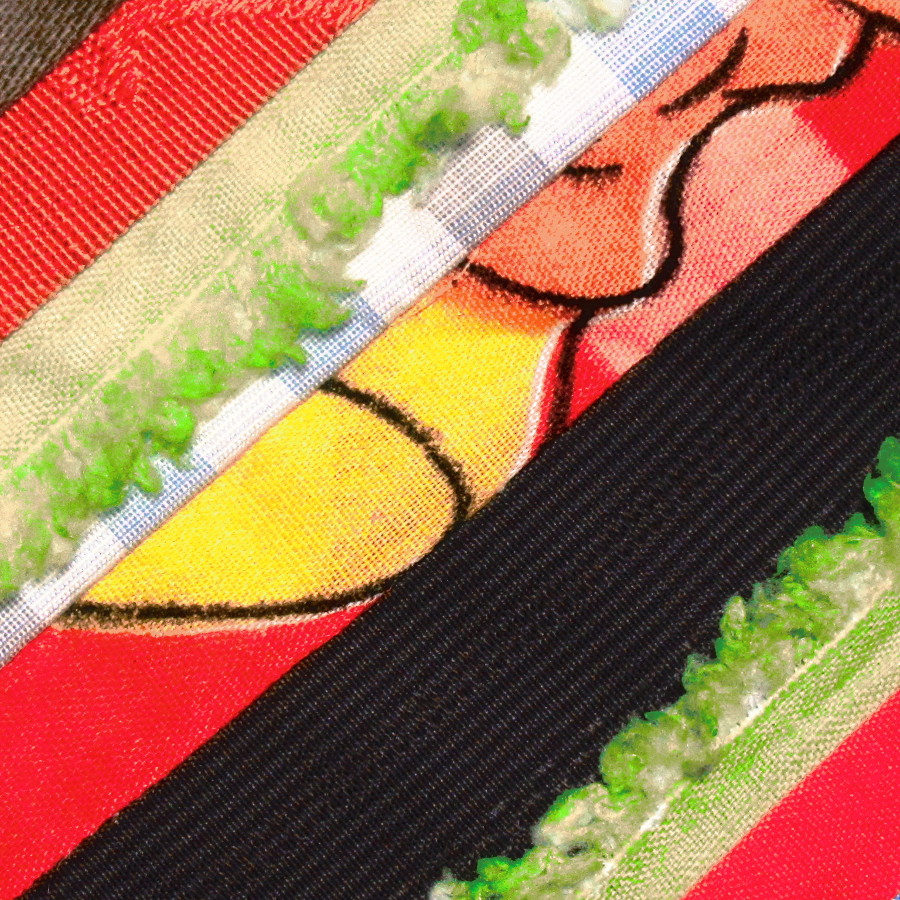 Word about the small group’s efforts spread, which led Sadhana to officially form Magic Fingers Association in 2007. The association aims to empower women and children from socially and economically disadvantaged backgrounds (called “beneficiaries”) by teaching them how to sew and make saleable products such as soft toys, quilts, bags, purses, wall hangings, cushion covers and more. 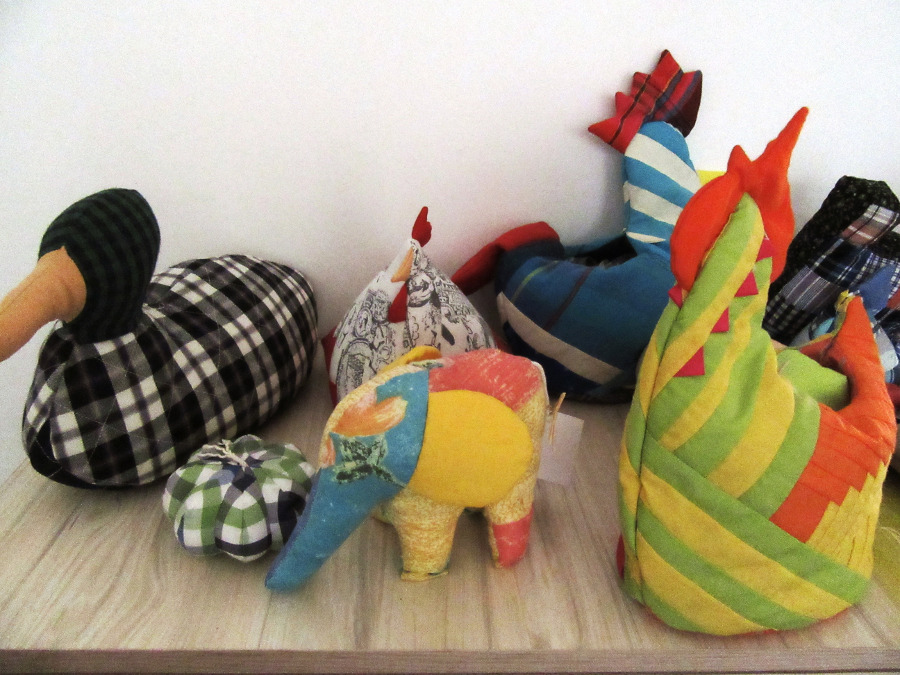 That same year the group received an order from the Gold Crest Hotel for 322 quilted bed spreads. At that time, the group had only a small dedicated space and no proper sewing machines or tools to fulfill such a large order. The NWEC helped by providing a larger space and proper sewing equipment through their business incubator program. The project’s success led to another large order from Gecko Kids for 60 patchwork Christmas bags.

It soon became apparent that the group needed better equipment to help them meet the increased demand for their products and to continue their training program. Sadhana was like many quilters who dream of owning an APQS longarm quilting machine! In 2009, Magic Fingers Association received a program grant from the European Union and a contribution from Star Knitwear to purchase an APQS Lenni. According to Sadhana, it was an answer to a dream! The group relocated to a bigger donated space to accommodate their new machine and to open up more classroom space to teach beneficiaries. Larger organizations and government agencies quickly noticed the work Magic Fingers Association was doing to help women and the environment at the same time. Soon Sadhana was sharing her concept with officials from as far away as India and Seychelles, twice providing training in Seychelles at the request of the Seychelles small enterprise promotion agency.

With the spotlight focusing more on Magic Fingers, the group realized another quilting machine would help them achieve their goals more quickly. They received a grant to add an APQS Millennium to their work space in 2012. Prior to having two longarm machines, the group had completed most of their projects by simply stitching in the ditch. Yet despite having the most advanced longarm quilting technology at their fingertips, they continued to use Lenni and Millie only for stitching in the ditch around their patchwork. Sadhana knew that the machines are capable of so much more!

That’s where I came in! Sadhana invited me to spend three weeks showing the members of Magic Fingers Association all the fabulous ways they could enhance their projects and complete them quickly with their APQS longarm machines! How could I refuse such a noble endeavor? I have been teaching longarm quilting to others for over 20 years, but I still get goosebumps when a student has a “lightbulb moment” during class. As I worked with seven main members of Magic Fingers Association, so many “aha moments” were happening it was like strobe lights were flashing every single day! That is the greatest reward a teacher can ever receive.

We started the training with basic machine maintenance, which was very empowering for the group. 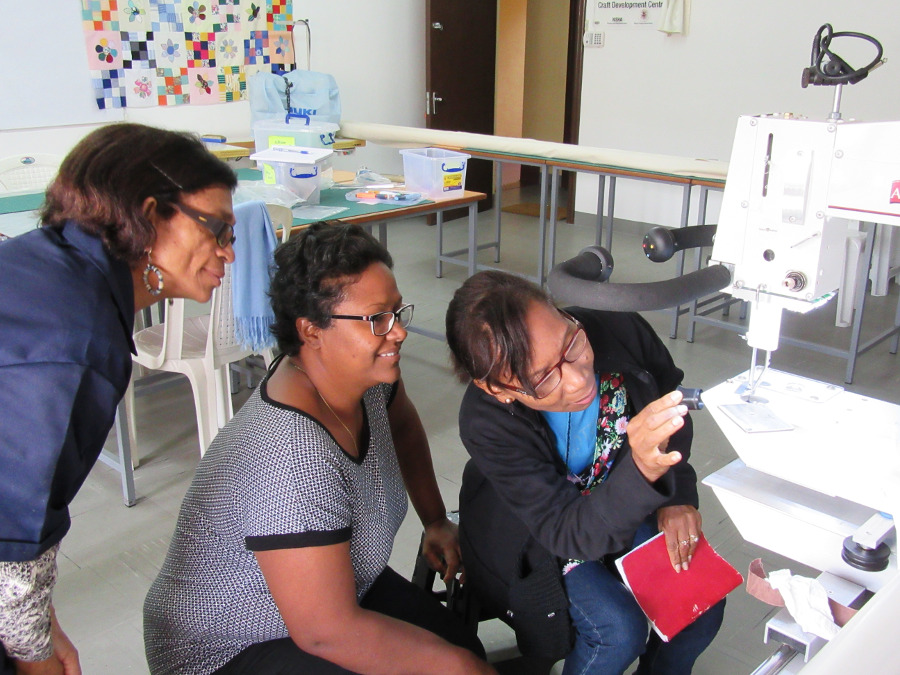 Several had never used tools of any kind. The delight and self-confidence alone that exuded from them when they learned how to use a screwdriver was worth every minute of that 22-hour plane ride! After teaching them different quilt loading techniques such as floating quilt tops or using zippers or plastic snappers, the members began to see how they could speed up their process by loading several projects at the same time. Next they learned how to attach binding with the longarm, as well as how to “pillowcase” a quilt while it’s still on the frame to create a finished project. That would help them finish beneficiary quilts faster, helping them earn more income.

Next we tackled pantographs and freehand overall designs. Even though each APQS machine includes a laser for easily quilting pantographs, the idea of covering the entire quilt with an overall design was a completely new concept for a group that had focused solely on stitching in the ditch. Imagine their excitement as they glided the machine along the pantograph pattern and watched the design emerge on the quilt with minimal effort! I don’t think I’ve seen brighter smiles anywhere.

The members were so enthralled with how the quilt transformed compared to stitching in the ditch that they were ready to spend the next few days just quilting overall pantograph designs. But I couldn’t let them stop there! After a morning of drawing shapes like circles, teardrops and hooks, the members soon discovered how easy freehand quilting could be with just a little muscle memory practice. Each one timidly touched the handles but the trepidation quickly evaporated as they experienced the joy of creating designs with their own hands. It became difficult to take turns as each member’s confidence grew and each wanted to keep quilting. 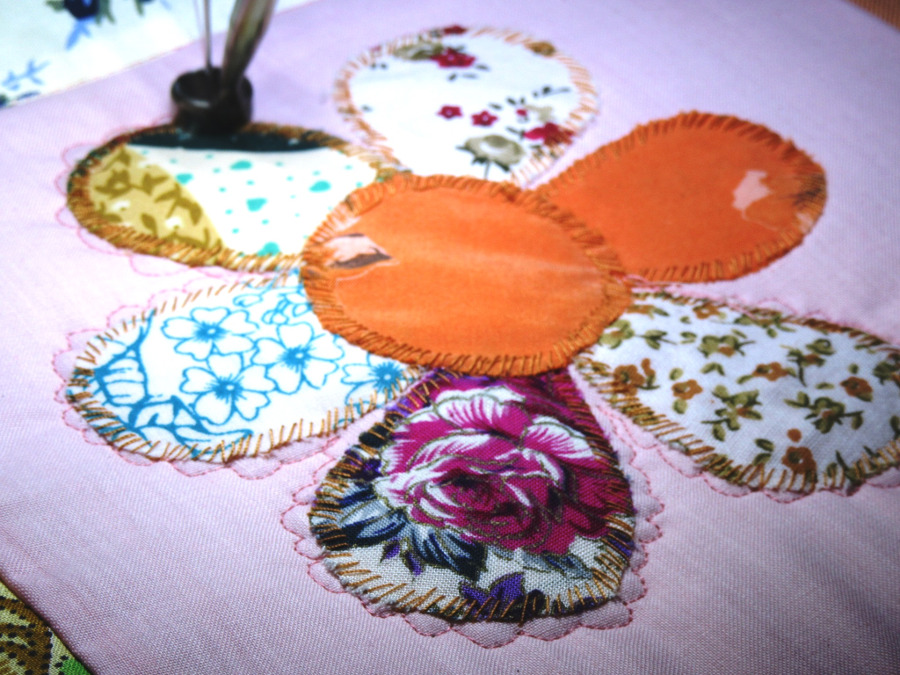 Soon they began to see the world of quilting blossom before their eyes as their practice quilt leaped to life! Only a few days before, the idea of doing anything but stitching between blocks was foreign, but now there was no holding them back. Each block took on a unique personality as the students began to brainstorm and experiment with their new-found skills.

APQS longarm quilting machines can do more than just quilt. To help Magic Fingers explore techniques that could help make their products more unique, I taught the members how to tie quilts, couch fibers on to fabric, weave fabric on the longarm frame, applique with the machine, and even piece quilts with specialty rulers. Each new technique started their creative juices flowing! The inspiration came tumbling out, with members scrambling to record all the ideas that filled their heads. 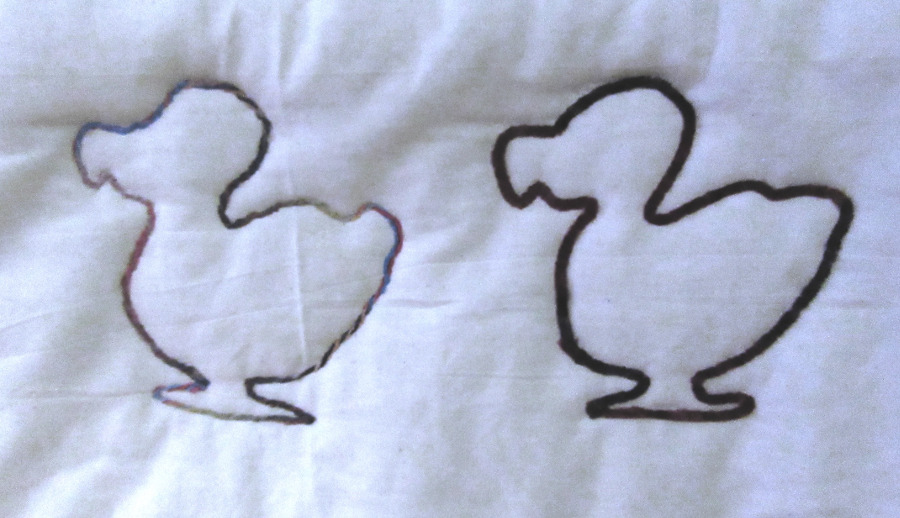 Several government agency representatives and community leaders came by the studio during training to check on their progress. Several even tried quilting themselves! Three weeks flew by for both me and the members of Magic Fingers. My hosts graciously arranged for my husband and me to see many island attractions during the weekends, including beach resorts, game reserves, and spectacular tropical views. This awesome experience concluded with a special ceremony honoring the beneficiaries and members of Magic Fingers Association, and recognizing the supporting organizations that have helped Magic Fingers empower over 300 women on the island since its inception. 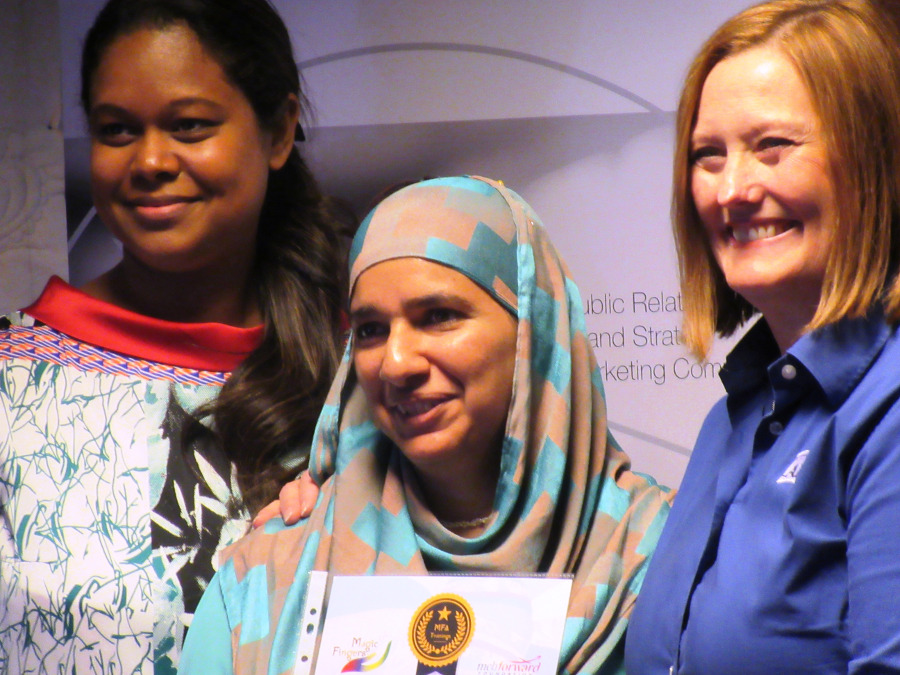 Now that the talented women of Magic Fingers Association have discovered all the fabulous ways they can use their APQS longarms, they are already making plans to get another APQS machine to help them aid even more women across the island. And when that time comes, I volunteered to visit again and help them further their cause when they get it!

Dawn Cavanaugh
Dawn Cavanaugh is the Education Director at APQS.
Quilting the Quilt: Traditional, Contemporary or Modern
Are you a traditionalist, or do you lean more toward contemporary? As the next quilting generation finds its voice, a new and different genre is emerging.
Keep reading >
APQS longarm giveaway winner check-in: Ralph and Deborah
In the summer of 2020, Ralph and Deborah of Berea, KY, got the surprise of a lifetime when they won a new Lenni quilting system from APQS. We gave them a call recently to see how they've been getting along with their new machine.
Keep reading >
APQS longarm giveaway winner check-in: Cindy
Cindy K. won a new Millie longarm quilting machine in the spring 2016. We caught up with her to see what’s she’s been up to since the big win.
Keep reading >
Quilting the Quilt: Echo Quilting
Echo quilting is a technique that is often overlooked as a design element, but it can create dramatic results.
Keep reading >