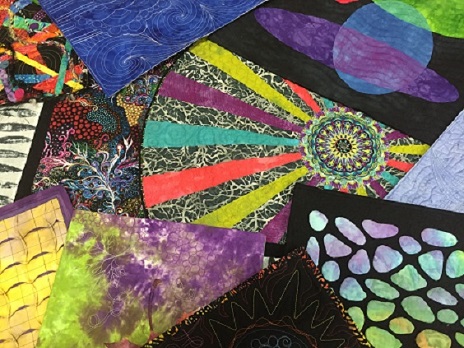 At your next quilt guild meeting, survey the room and make an educated guess about the average age of those present. If you pegged it somewhere around 60, you’re pretty close to the national average. According to the 2014 Quilts in America Survey, the average age of a “dedicated quilter” in America is 64 years old.

When the survey took place four years earlier, the average age was still 64. The fact the average has remained constant can be interpreted two ways—either older quilters are passing away, or younger quilters are joining the ranks. While we can’t do much about the former, as a quilting community we can certainly do something about the latter so that this wonderful art is passed on to the next generation.

Connie Keller of APQS Texas has found a unique way to introduce quilting and the magical powers of a longarm machine to a younger audience through the help of the University of North Texas. The university’s fiber arts students will spend two intense days this week using Connie’s APQS machines learning not only about quilting, but how a longarm can open doors for them as artists and even business owners.

“Students in the UNT fiber arts department actually don’t have any idea how to operate a basic sewing machine,” said Connie. “They understand how to use two computerized weaving looms at the school, and they learn all about fabric dyeing, painting and weaving. But sewing—let alone quilting—is foreign to them. I saw this opportunity as a way to open doors for their creativity and also as a way to make quilting more relevant to 20-somethings as both an art form and a career opportunity.”

In the workshop students will learn how to stitch with an APQS longarm machine. But the real impact will be when they realize how else this wonderful tool can be used in their curriculum and in their art. The frame can serve as a giant weaving loom to create fabric and textile pieces. They will be able to add embellishments, create texture through fabric manipulation, add dimension to their painted and dyed pieces and so much more.

“I’m excited to introduce an entirely new generation to quilting,” said Connie. “Today’s youth are all about technology. A longarm quilting machine in their classroom can help ignite a passion for quilting and fiber arts that will give them decades of enjoyment well beyond their four-year degree.”

Statistics support Connie’s feeling. According to the Quilters in America Survey, 79 percent of dedicated quilters are well-educated and have a college degree. What better way to introduce a new generation to quilting than to have it built right into their curriculum!

Dawn Cavanaugh
Dawn Cavanaugh is the Education Director at APQS.
APQS longarm giveaway winner check-in: Ralph and Deborah
In the summer of 2020, Ralph and Deborah of Berea, KY, got the surprise of a lifetime when they won a new Lenni quilting system from APQS. We gave them a call recently to see how they've been getting along with their new machine.
Keep reading >
Quilt drive for Hurricane Harvey victims
Several APQS Stores are teaming together to open their rental machines to any quilters who would like to complete quilts to comfort Hurricane Harvey victims.
Keep reading >
APQS longarm giveaway winner check-in: Corintha
We caught up with Corintha R. to see what she’s been up to since winning a Freddie quilting machine in the 2014 APQS longarm giveaway contest.
Keep reading >
2019 APQS machine line-up: learn what's new
Is your new year’s goal to get more quilts done? Our 2019 APQS longarm line-up can help you keep at least one resolution this year! These new features will make your quilting simple and fun—and will definitely help you cross projects off your list!
Keep reading >