I am waiting for some clever millennial to come up with a ‘perpetual bobbin’ for sewing and quilting machines. Can you imagine never having to wind another bobbin? That brilliant person will be filthy rich!

I’m told by engineering types that such a thing already exists—but it’s a chain stitch machine. If you pull on one end of a chain-stitched thread, the entire stitching line pulls right out! Probably not the best way to stitch a quilt. Well, if we’re stuck winding bobbins until some genius has an ‘aha’ moment, then it pays to learn as much as we can about current bobbin technology. While changing bobbins is not a favorite chore, it’s helpful to know about the advantages and disadvantages of little and big bobbins if you want to add a quilting machine to your studio.

If you own more than one sewing machine, you’ve already discovered that bobbins are not necessarily interchangeable among them. Some machines use a bobbin case, while others have drop-in bobbins. Some bobbins are taller; some are wider. Some have holes in them; some have solid sides. Some machines prefer metal bobbins over plastic bobbins, and vice versa. 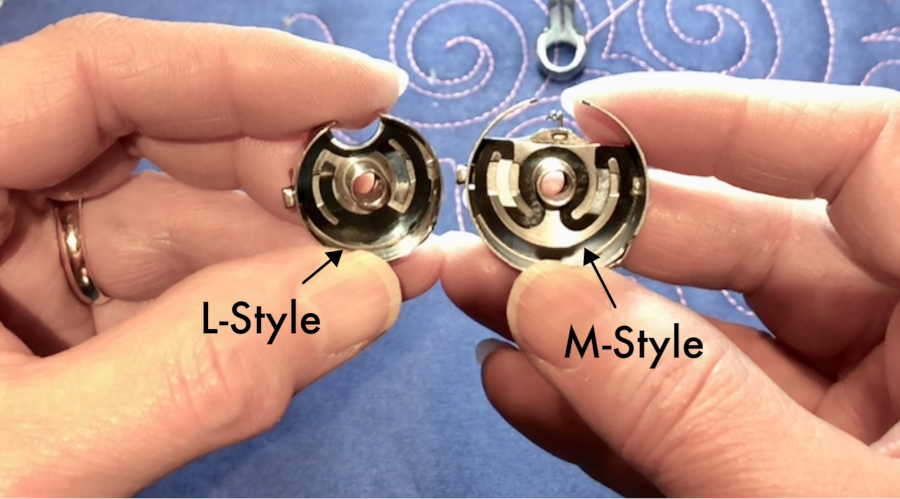 Even with two bobbin size options, longarms are particular when it comes to bobbins and bobbin cases. Though a bobbin or bobbin case might look similar from one machine to another, small differences can have a huge impact on your machine’s performance if you use the wrong one.

Take a look at the two bobbins and bobbin cases in this picture. 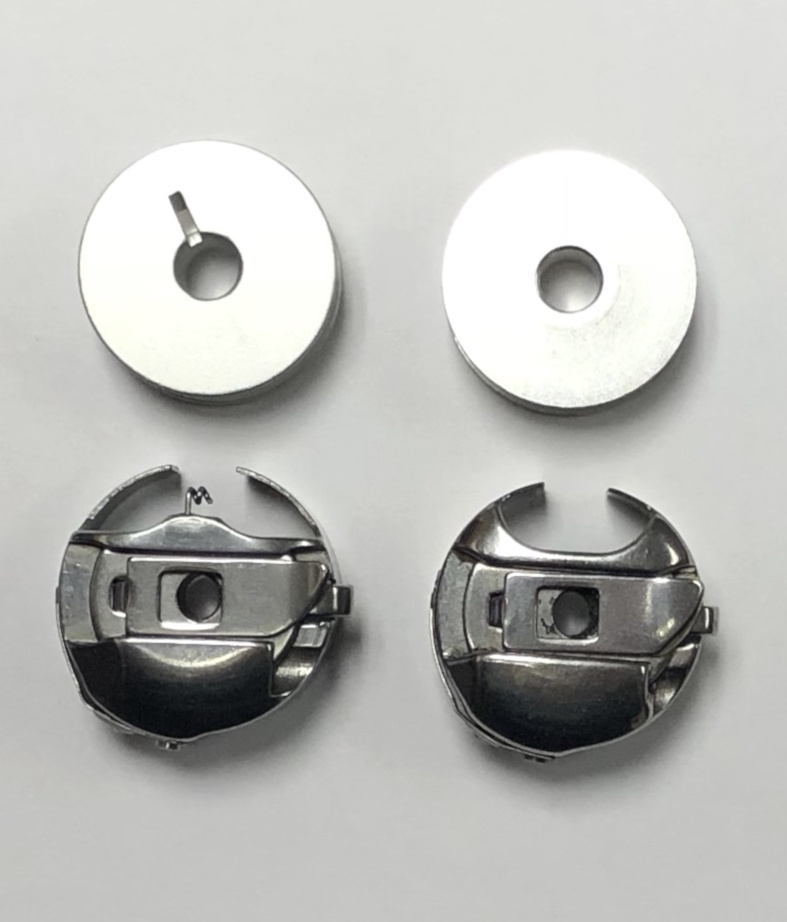 Both are big M bobbins and cases. The one on the left has a “pigtail guide” that helps align the bobbin thread with the needle, but the case on the right does not. The left-hand bobbin has a slot that fits over a bobbin winder mechanism, but the bobbin on the right does not. That could make winding difficult on some machines! It’s important to choose parts that match your machine’s specifications for best tension, stitch quality and to reduce issues caused from poorly fitting parts.

Back to bobbin size. The little and big bobbins both have advantages and drawbacks. When choosing which one is right for you, it helps to consider what type of quilting you want to do as well as what your budget is for parts. Small L-style bobbins do not hold as much thread as big bobbins, so you will definitely have to change them more often. Big bobbins allow you to quilt about twice as far before the bobbin runs out. If you detest changing bobbins, that can be a big plus.

One important difference is how the bobbin size affects your tension and stitch quality. Compare bobbin sizes to a semi-truck and VW Beetle. If both vehicles are stopped at a traffic light, when it changes to green the Beetle will easily zip ahead, but the truck’s load requires a lot more power and torque to get it moving. When they reach the next stoplight, the Beetle can stop much more quickly than the semi. The truck driver has to hit the brakes much sooner to stop in time; if she’s not paying attention, her momentum and load will blast her right through it. When you “hit the brakes” and change quilting directions, the bobbin needs to respond and stop with you. With a big M-style bobbin, your speed and the bobbin’s extra mass make it hard to stop it when you stop, which can lead to bobbin backlashing.

That makes big M bobbins better suited for overall designs, pantographs or designs that have fewer short, fast direction changes. You’ll get lots of mileage out of the bobbin before it’s time to change it, but you might struggle with tension on complex quilting as the bobbin pulls harder. If you fancy more detailed quilting or prefer precise designs, the small L bobbin typically gives better tension and stitch quality. Its lighter mass allows it to respond more quickly to direction changes without overspinning and spitting out extra bobbin thread inside the case. Think about how that VW Beetle can zip around a crowded parking lot compared to the semi!

You’ll quilt farther with an M-style bobbin, but you’ll also pay more for bobbins and bobbin cases. On average, an M-style bobbin case costs over $50, compared to only $12 for an L-style bobbin. Personally, I have several different bobbin cases, each set for different bobbin types and bobbin threads. This saves me time from adjusting the bobbin tension every time I switch from a cotton thread to a polyester thread, or invisible thread or pre-wound bobbins. I’m also one of those people who hates to peel off unused bobbin thread so that I can wind on another color, so I’ve got more than 75 different bobbins in my studio with leftover bobbin thread on them! Small bobbins are less than a dollar, but the M bobbins are around $3.00 each, a much bigger investment. Plus, if anything ever damages the hook where the bobbin sits, L bobbin hooks run around $90 compared to M hooks, which can be over $200.

Of course, you aren’t limited to winding your own bobbins. Pre-wound bobbins are available for both bobbin sizes. You’ll find pre wound bobbins with cardboard sides and some with no sides. Some pre-wound bobbins have a magnet embedded in one side of the core. This magnet faces the back of the bobbin case, and replaces the brake spring found in many cases. (You can see the brake springs inside the cases in this first photo of this post.) A brake spring does what it implies—it 2 “puts the brakes” on the bobbin and stops it from overspinning to reduce backlashing. Factory-wound bobbins hold more thread than I could ever wind on a bobbin myself. But the actual yardage is also affected by the thread type and thickness, as you can see here: 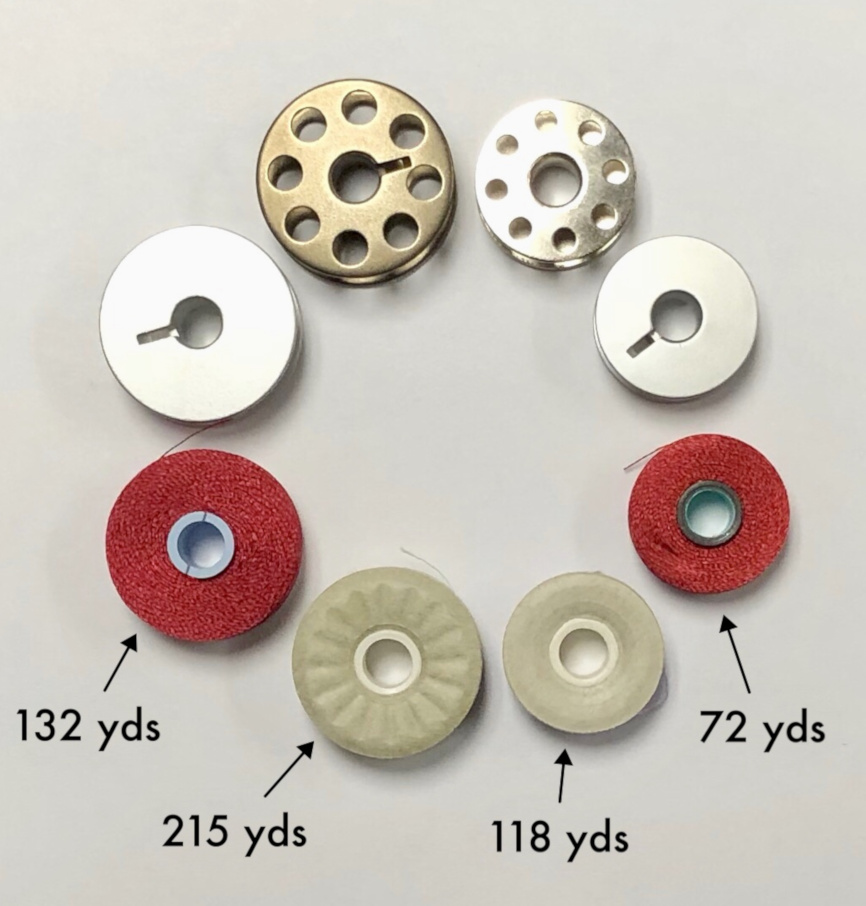 The red bobbins with the magnetic core are wrapped with 40-weight trilobal polyester thread, and the cardboard bobbins are wound with 60-weight polyester thread. With a finer weight thread, more yardage fits on the bobbin. One common question about big and small bobbin machines is whether you can use a small bobbin inside a big bobbin machine and have the best of both worlds. Technically a small bobbin will fit into a big bobbin case. But unless the bobbin has a magnetic core, other styles of small bobbins will typically have too much “play” inside the case and you’ll end up with tension issues and snarly bobbin thread. It might get you by in a pinch, but the best solution is to use the correct bobbin size for your machine, and to choose a machine whose bobbin size fits your quilting style.

Dawn Cavanaugh
Dawn Cavanaugh is the Education Director at APQS.
APQS quilting machine table & frame sizes – what you need to know
How much space do you need for your APQS machine? What makes APQS frames unique? What is the maximum quilt size you can quilt with each of our table sizes?
Keep reading >
Quilting the Quilt: Pantograph or custom - which should I choose?
When debating between custom and overall quilting for your quilt, you’ll save yourself lots of time and stress if you answer these questions to help you decide...
Keep reading >
Video Tutorial: Starts and Stops
Watch this in-depth video from APQS Education and Service Director, Dawn Cavanaugh, to learn her favorite hacks for three simple starts and stops quilting methods!
Keep reading >
Our most popular posts of 2019
Readers from around the world read our articles every week to learn about new longarm techniques, become inspired by other quilter's work and share the love of quilting. The seven articles featured in this post are the ones that received the most visits in 2019.
Keep reading >