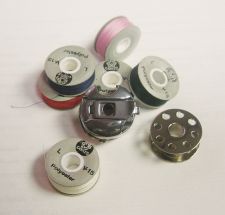 It doesn’t matter whether you wind your own or you use prewound bobbins…you’ve probably got a snarly mess in a drawer or jar somewhere! We have met diligent quilters over the years use only two bobbins on one quilt! Yes, you read that right – two bobbins! No, they weren’t  quilting lines 10 inches apart, but they did keep one bobbin in the machine and the other on the winder. When the machine bobbin was out, they changed places!

Most of us aren’t quite that patient. We want fast, convenient bobbin changes. Frugality may creep in for some of us who have collections of 50 to 100 partially wound bobbins lying around our sewing rooms. We’re either too cheap or too lazy to peel off the last 10 yards of thread on a half-used bobbin. After all, we might use that color again someday! Never mind the fact that we spent 50 cents on a bobbin to hold 3 cents-worth of thread, or that we’ll soon forget what kind of thread is even on the bobbin!

If you really do like to use more than two bobbins at a time, you can find many commercial gadgets to store them, including fancy pegboards and rubber rings. But if you really are trying to be frugal, try collecting some of your old pill bottles and storing bobbins inside. Tell your husband you want to browse the sporting goods aisle for a gift for him…but look for a small tackle box with dividers inside. Many have small compartments to hold not only bobbins, but marking tools, scissors, pins and more. If your quilting space is limited, use vertical storage. Jewelry organizers with clear pockets can hang in your closet as a space saver.

To keep your half-wound bobbin thread tails neat and tidy, buy tiny pony tail holders in the hair product aisle in the discount or dollar store. These are colorful and their texture grabs loose thread tails and holds them tight!

APQS Team
This post was written by members of the APQS marketing team.
You can test quilting designs with vinyl
If you're struggling with how a quilting design might look in your quilt, here's a great way to audition your ideas.
Keep reading >
How to completely bind your quilt by machine
With this trick from APQS Education Director Dawn Cavanaugh, we're going use the machine to completely bind the quilt by sewing the binding to the back of the quilt first and then wrapping it around to the front.
Keep reading >
Storage ideas for quilters
Quiltmaker Suzanne Nelson shares ideas to store all our beloved gadgets and gizmos.
Keep reading >
Reference chart for squares on point
Sometimes just a tilt of your head is all it takes to change a boring view into something wonderful to behold! That's the magic of setting quilt blocks "on point". Download our FREE reference chart for squares on point.
Keep reading >