Blue Star banners – what are they? 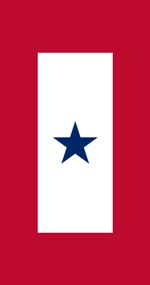 Perhaps you’ve seen a banner hanging in a window. Maybe it’s been on the front door. The image is easily recognizable a single blue star, floating on a crisp white background and surrounded by a red border. These Blue Star banners represent a family’s loved ones who are serving their country in the military.

The practice actually started in 1917 as a father’s way to honor his two sons serving on the front lines during World War One. Army Captain Robert L. Queissner of the 5th Ohio Infantry designed and patented this symbol of honor. On September 24, 1917, the flag was officially acknowledged in the Congressional Record in Ohio, commemorated with these words: The world should know of those who give so much for liberty. The dearest thing in the entire world to a father and mother – their children.”

During World War II, the Department of War issued specifications on the manufacture of the flag as well as guidelines indicating when and by whom the service flag could be flown or how the service lapel button could be worn. The Department of Defense updated the guidelines on December 1, 1967 with an Act of Congress authorizing a service flag and a service lapel button.

Blue Star Service Banners have a blue star on a white field, with a red border. A banner may include up to five stars – one for each family member on active duty. If the soldier dies or is killed while serving, a gold star is superimposed onto the blue one, leaving a bit of the blue star showing as a border. When the banner is displayed as hanging (against a wall or suspended in a window, for example) the gold star(s) will be to the right of, or above the blue star(s) in a place of honor nearest the staff.

If you have a loved one serving in the armed forces including the National Guard and reserves, you can honor their service by making your own Blue Star banner with this free pattern from The Quilt Bug. Our heartfelt thanks to those who serve!

APQS Team
This post was written by members of the APQS marketing team.
Strip cutting quickies
Here's a handy chart to use to help you cut the patches you need for your project using a 6" x 24" cutting ruler and long strips of fabric.
Keep reading >
Wholecloth history
When you read through a quilt show catalog, you'll probably see a category devoted to "whole cloth quilts." Learn more about wholecloth history...
Keep reading >
Quilting the Quilt: Which way doth the wind blow?
By nature, a pinwheel block looks like it’s spinning in the breeze as the triangle points lead your eyes around the block. Depending on which way you place the points, the block rotates clockwise or counterclockwise. Mix the block orientation on the same quilt, and you’ll create quite a stir!
Keep reading >
APQS Video Tutorial: Ribbon Candy Bubble
Watch APQS Dealer and Educator Angela Huffman teach you the Ribbon Candy Bubble design. It's great to use in a sashing space or you could make it bigger in a border design.
Keep reading >